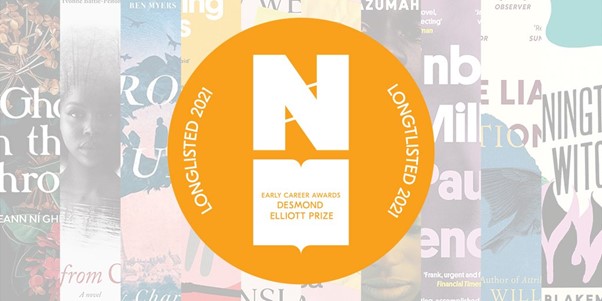 Congratulations to  A. K. Blakemore and Caleb Azumah Nelson, whose debut novels have both been Longlisted for the Desmond Elliot Prize 2021.

With a reputation as the most prestigious award for debut novelists, the Desmond Elliott Prize is the flagship award in the National Centre for Writing’s portfolio of Early Career Awards. Ten novels are longlisted for the prize, from which three shortlisted novels are selected by a panel of expert judges. The winning author will be celebrated at an event in July 2021.

Two young people meet at a pub in South East London. Both are Black British, both won scholarships to private schools where they struggled to belong, both are now artists – he a photographer, she a dancer – trying to make their mark in a city that by turns celebrates and rejects them. Tentatively, tenderly, they fall in love. But two people who seem destined to be together can still be torn apart by fear and violence.

At once an achingly beautiful love story and a potent insight into race and masculinity, Open Water asks what it means to be a person in a world that sees you only as a Black body, to be vulnerable when you are only respected for strength, to find safety in love, only to lose it. With gorgeous, soulful intensity, Caleb Azumah Nelson has written the most essential British debut of recent years.

‘Like the title suggests, Open Water pulls you in with one great swell, and it holds you there closely. A beautiful and powerful novel about the true and sometimes painful depths of love’ – Candice Carty-Williams, author of Queenie

Caleb Azumah Nelson is a 27-year-old British-Ghanaian writer and photographer living in South East London. His writing has been published in Litro. He was recently shortlisted for the Palm Photo Prize and won the People’s Choice prize. Open Water is his first novel.

THE MANNINGTREE WITCHES (Granta Books) by A. K. Blakemore

England, 1643. Parliament is battling the King; the war between the Roundheads and the Cavaliers rages. Puritanical fervour has gripped the nation, and the hot terror of damnation burns black in every shadow.

In Manningtree, depleted of men since the wars began, the women are left to their own devices. At the margins of this diminished community are those who are barely tolerated by the affluent villagers – the old, the poor, the unmarried, the sharp-tongued. Rebecca West, daughter of the formidable Beldam West, fatherless and husbandless, chafes against the drudgery of her days, livened only by her infatuation with the clerk John Edes. But then newcomer Matthew Hopkins takes over the Thorn Inn and begins to ask questions about the women of the margins. When a child falls ill with a fever and starts to rave about covens and pacts, the questions take on a bladed edge.

The Manningtree Witches plunges its readers into the fever and menace of the English witch trials, where suspicion, mistrust and betrayal ran amok as the power of men went unchecked and the integrity of women went undefended. It is a visceral, thrilling book that announces a bold new talent.

‘I loved this riveting, appalling, addictive debut. Blakemore captures the shame of poverty and social neglect unforgettably, and the alluring threat of women left alone together, in a novel which vividly immerses the reader in the world of those who history has tried to render mute’ – Megan Nolan, author of Acts of Desperation

A. K. Blakemore is the author of two full-length collections of poetry: Humbert Summer (Eyewear, 2015) and Fondue (Offord Road Books, 2018), which was awarded the 2019 Ledbury Forte Prize for Best Second Collection. She has also translated the work of Sichuanese poet Yu Yoyo (My Tenantless Body, Poetry Translation Centre, 2019). Her poetry and prose writing has been widely published and anthologised, appearing in the The London Review of Books, Poetry, Poetry Review and The White Review, among others.