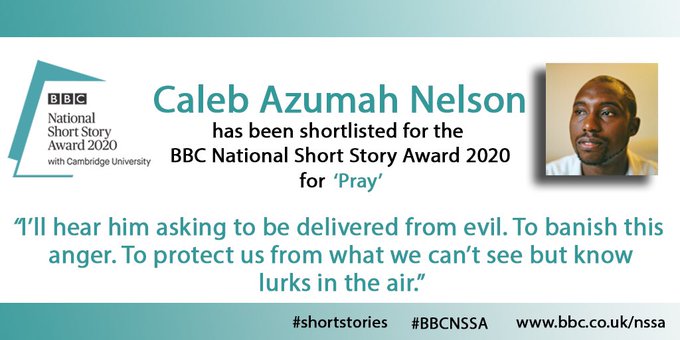 Congratulations to Caleb Azumah Nelson on being shortlisted for the BBC National Short Story Award 2020! His story 'Pray' joins stories by Sarah Hall, Eley Williams, Jan Carson and Jack Houston in the running for the £15,000 prize. ‘Pray' is a ‘vibrant, invigorating and agile’ story set over a summer in South East London. Charged with ‘wit, anger, affection and sorrow’, the story shows the reality for young black men navigating a world that ‘wasn’t built with us in mind’. With characters and dialogue so alive they reach out from the page, ‘Pray’ explores fear, injustice, masculinity, race and the origins of violence. Caleb’s eagerly anticipated debut novel Open Water recently sold in a nine-way auction and publishes in February 2021.

Jonathan Freedland, journalist, author and Chair of Judges for the BBC National Short Story Award 2020, says: ‘In a strange, perplexing year, we five judges were privileged to be taken away to worlds both faraway and near, rendered by five brilliant writers. These stories deal with the timeless human preoccupations – family, love, loss, longing – but with freshness, energy and great skill. Any reader picking up the collection or tuning into them on air has a variety of delights to look forward to and – luckier than us – they'll be free of the painful task of picking a winner.’

Di Speirs, Editor of Books at BBC Radio and judge of the Award since its launch says: ‘I am inordinately proud of this year’s shortlist – it’s sharp, relevant, sometimes heart-rending, sometimes funny! If we set out 15 years ago to help save the short story, what this year’s writers prove is that in 2020 it is rude health and more versatile and flexible than ever. From what is practically but perfectly miniaturised flash fiction, to the fully literary and layered, via bold new voices tackling tough realities and incisive humour within domestic tensions, this list reflects a generation of writers playing with form, range and the freedom of short fiction. Do listen to or read them.’

The BBC National Short Story Award with Cambridge University was established to raise the profile of the short form and this year’s shortlist join distinguished alumni such as Zadie Smith, Lionel Shriver, Rose Tremain, William Trevor and Mark Haddon. As well as rewarding the most renowned short story writers, the Award has raised the profile of new writers including Ingrid Persaud, K J Orr, Julian Gough, Cynan Jones and Clare Wigfall.

‘It is a pleasure this year to see the shortlist represent both established writers of short stories, and new emerging writers, reflecting Cambridge’s commitment both to studying the canonical history of short fiction, and its focus on nurturing students’ creativity and voice. In a year such as this, the shortlist yet again demonstrates the importance of creative writing, especially the short form, for making sense of the world we all share.’