UA Clients on the 2019 Not the Booker Longlist 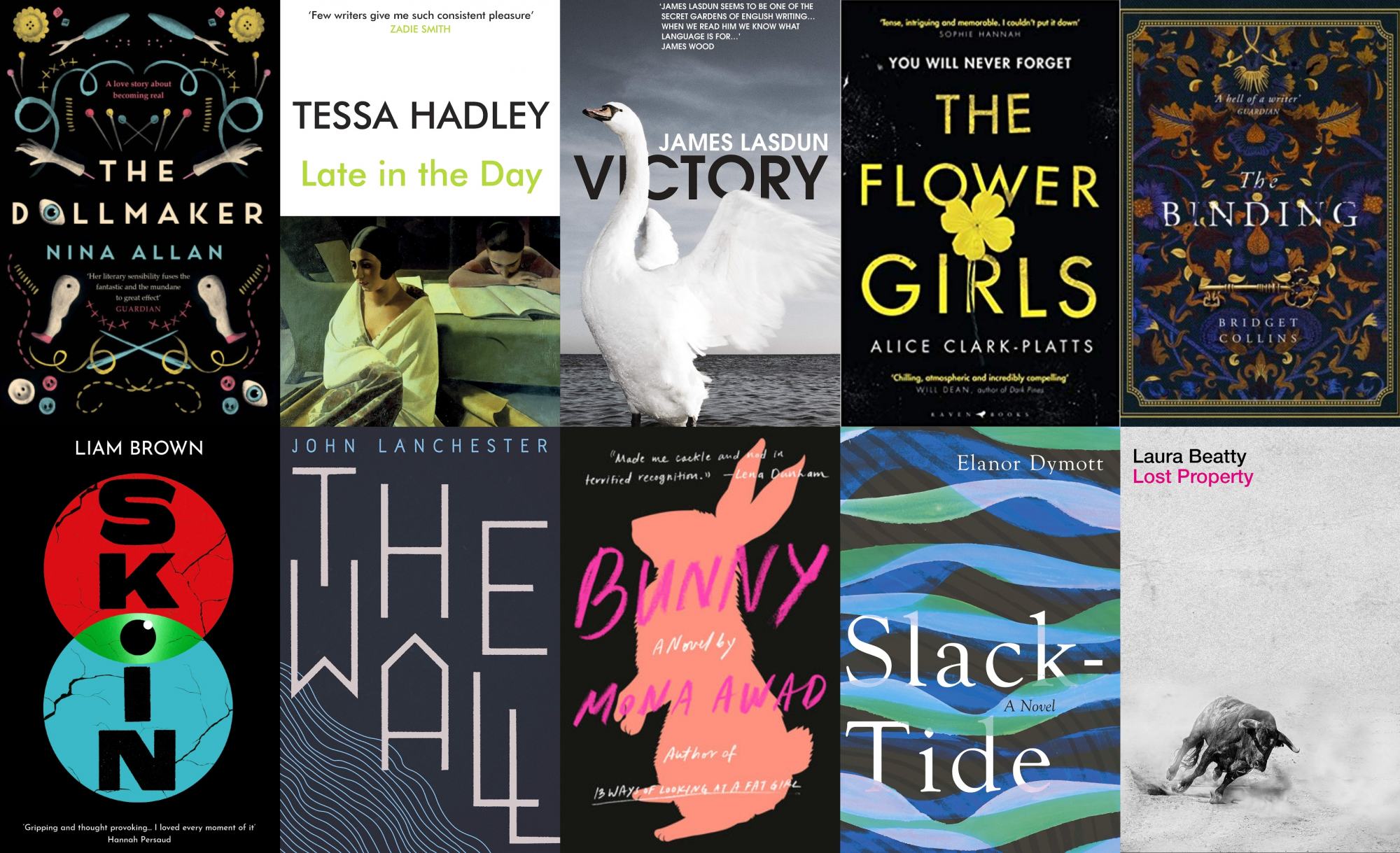 The Guardian's annual Not the Booker Prize has announced its longlist - 171 books have been nominated by the public, including a host by UA clients. These books will be whittled down by public vote to just 3, which will be joined by three more nominated by the 2018 judging pannel, Chester’s award-winningStoryhouse library and the 2019 independent bookseller of the year, Edinburgh’s Golden Hare Books. These six books will then battle it out for the final prize.

You can see the full shortlist and find out how to vote here, and you can vote for your favourites until 23.59 BST on Monday 5 August 2019. Not sure who to vote for? Here are our suggestions:

Stitch by perfect stitch, Andrew Garvie makes exquisite dolls in the finest antique style. Like him, they are diminutive, but graceful, unique and with surprising depths. Perhaps that's why he answers the enigmatic personal ad in his collector's magazine.

Letter by letter, Bramber Winters reveals more of her strange, sheltered life in an institution on Bodmin Moor, and the terrible events that put her there as a child. Andrew knows what it is to be trapped; and as they knit closer together, he weaves a curious plan to rescue her.

On his journey through the old towns of England he reads the fairytales of Ewa Chaplin - potent, eldritch stories which, like her lifelike dolls, pluck at the edges of reality and thread their way into his mind. When Andrew and Bramber meet at last, they will have a choice - to remain alone with their painful pasts or break free and, unlike their dolls, come to life.

A love story of two very real, unusual people, The Dollmaker is also a novel rich with wonders: Andrew's quest and Bramber's letters unspool around the dark fables that give our familiar world an uncanny edge. It is this touch of magic that, like the blink of a doll's eyes, tricks our own...

Samantha Heather Mackey couldn't be more of an outsider in her small, highly selective MFA program at New England's Warren University. A scholarship student who prefers the company of her dark imagination to that of most people, she is utterly repelled by the rest of her fiction writing cohort – a clique of unbearably twee rich girls who call each other 'Bunny', and are often found entangled in a group hug so tight they become one.

But everything changes when Samantha receives an invitation to the Bunnies' fabled 'Smut Salon', and finds herself inexplicably drawn to their front door. As Samantha plunges deeper and deeper into the sinister yet saccharine world of the Bunnies, the boundary between fiction and reality begins to blur.

In the middle of her life, a writer finds herself in a dark wood, despairing at how modern Britain has become a place of such greed and indifference. In an attempt to understand her country and her species, she and her lover rent a busted-out van and journey through France and down to the Mediterranean, across Italy and the Balkans, finishing in Greece and its islands. Along the way, they drive through the Norman Conquest, the Hundred Years War, the Italian Renaissance, the 1990s and on to the current refugee crisis, encountering the shades of history, sometimes figuratively and sometimes - such as Joan of Arc, sitting pertly in the back of the van - quite literally.

As she roadtrips through 10,000 years of civilization, watching humanity repeat itself with wars over borderlines and exceed itself with the creation of timeless art, the writer begins to reckon with the very worst and the very best in our collective natures - and it is in seeing the beauty beside the ugliness, the light among the trees, that she begins to see, finally, a way for her to go home.

A strange virus is sweeping the globe. Humans have become allergic to one another. Simply standing next to somebody could be a death sentence. A kiss could be fatal.

Angela is a woman trying to get by in this bewildering new world. Though she still lives with her husband and children, they lead separate lives. Confined to their rooms, they communicate via their computers and phones. In some ways, very little has changed.

That is, until she spots a mysterious stranger walking through town without even a face mask for protection. A man, it seems, immune to this disease. A man unlike anyone else she knows. A man it might just be safe to touch...

Three children went out to play. Only two came back.

The Flower Girls. Laurel and Primrose.

One convicted of murder, the other given a new identity.

And the Flower Girls are about to hit the headlines all over again...

Emmett Farmer is working in the fields when a letter arrives summoning him to begin an apprenticeship. He will work for a Bookbinder, a vocation that arouses fear, superstition and prejudice – but one neither he nor his parents can afford to refuse.

In a vault under his mentor’s workshop, row upon row of books – and memories – are meticulously stored and recorded.

Then one day Emmett makes an astonishing discovery: one of them has his name on it.

THE BINDING is an unforgettable, magical novel: a boundary-defying love story and a unique literary event.

It is four years since the loss of a child broke her marriage, and Elizabeth is fiercely protective of her independence. She meets Robert – exuberant, generous, apparently care-free – and they fall in love with breath-taking speed.

Slack-tide tracks the ebbs and flows of the affair: passionate, coercive, intensely sexual. When you’ve known lasting love and lost it, what price will you pay to find it again?

Alexandr and Christine and Zachary and Lydia have been close friends since they first met in their twenties. Thirty years later Alex and Christine are spending a leisurely summer evening at home when they receive a call from a distraught Lydia. Zach is dead.

In the wake of this profound loss, the three friends find themselves unmoored; all agree that Zach was the sanest and kindest of them all, the irreplaceable one they couldn’t afford to lose. Inconsolable, Lydia moves in with Alex and Christine. But instead of loss bringing them closer, the three of them find over the following months that it warps their relationships, as old entanglements and grievances rise from the past, and love and sorrow give way to anger and bitterness.

Late in the Day explores the tangled webs at the centre of our most intimate relationships, to expose how beneath the seemingly dependable arrangements we make for our lives lie infinite alternate configurations. Ingeniously moving between past and present and through the intricacies of her characters’ thoughts and interactions, Tessa Hadley once again shows that she has become one of this country’s great contemporary novelists.

Kavanagh begins his life patrolling the Wall. If he's lucky, if nothing goes wrong, he only has two years of this, 729 more nights.

The best thing that can happen is that he survives and gets off the Wall and never has to spend another day of his life anywhere near it. He longs for this to be over; longs to be somewhere else.

He will soon find out what Defenders do and who the Others are. Along with the rest of his squad, he will endure cold and fear day after day, night after night. But somewhere, in the dark cave of his mind, he thinks: wouldn't it be interesting if something did happen, if they came, if you had to fight for your life?

John Lanchester's thrilling, hypnotic new novel is about why the young are right to hate the old. It's about a broken world you will recognise as your own-and about what might be found when all is lost.

Love and hate, desire and guilt, friendship and betrayal form the coordinates of these two intensely dramatic stories of men and women caught between their irrational passions and the urge for control.

In Feathered Glory the seemingly happy marriage of a school principal and his artist wife reveals dangerous fault-lines as an old lover reappears in the husband’s life and the wife, fascinated by a charismatic wildlife rehabilitator, brings an injured swan into their home. The poignant denouement leaves every character irreversibly transformed.
The past also haunts the present in Afternoon of a Faun, where an accusation of historic sexual assault plunges Marco Rosedale, an English journalist in New York, into a series of deepening crises. Set during the months leading up to Trump’s election, this is at once a study of our shifting social and sexual mores, and a meditation on what makes us believe or disbelieve the stories of other people.

These gripping, darkly comic novellas reflect and complement each other, offering a sharply observed vision that will resonate with anyone interested in the clash of power and desire in our embattled contemporary lives.