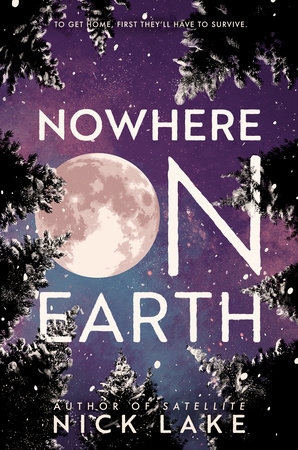 A huge congratulations to Nick Lake whose latest YA novel NOWHERE ON EARTH has been shortlisted for the CILIP Carnegie Medal 2020!

NOWHERE ON EARTH is about a girl who must brave the elements to help a lost child with an otherworldly secret. Sixteen-year-old Emily is on the run. Between her parents and the trouble she’s recently gotten into at school, she has more than enough reason to get away. But when she finds a little boy named Aidan wandering in the woods, she knows she needs to help him find his way home. But getting home is no easy matter, especially when Emily finds out that Aidan isn’t even from Earth. When their plane crashes into the side of a snowy mountain, it’s up to Emily to ensure Aidan and their pilot, Bob, make it off the mountain alive. Pursued by government forces who want to capture Aidan, the unlikely team of three trek across the freezing landscape, learning more about each other, and about life, than they ever thought possible. NOWHERE ON EARTH was published by Hachette Children's Group in 2019, and will be published by Penguin Random House in the US on 26th May 2020.

This is Nick's second time being shortlisted for the Carnegie Medal, with his first nomination in 2016 for THERE WILL BE LIES. He is the winner of the prestigeous Michael L. Printz Award winner for In Darkness. His novel Hostage Three received was named a Publishers Weekly, School Library Journal, and Boston Globe Best Book of the Year. Nick is also the publishing director for fiction at HarperCollins Children’s Books UK.