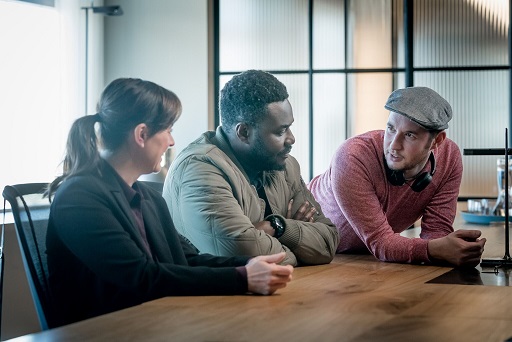 Lewis is currently directing SHERWOOD for House Productions/BB1. Prior to this, he directed Jimmy McGovern’s TIME for BBC Studios starring Sean Bean and Stephen Graham. The 3-parter has received several nominations at this year’s TV BAFTAs, including Best Director and Best Mini-Series, as well as acting nods for Sean and Stephen.

In 2020 he directed and executive produced DES for New Pictures and ITV, having created the three-part drama with writer Luke Neal. The series has been nominated twice at the International Emmy Awards 2021, including Best TV Movie/Mini-Series. The first episode had consolidated viewing figures of 11.4 million making it ITV's biggest new series since the launch of series CLEANING UP in January 2019, a show which he developed with writer Mark Marlow, directing the first four episodes for Sister Pictures.

In 2018 he directed DARK MONEY for BBC One and The Forge. The four-part drama follows the family of an abused child who accept hush money from a famous filmmaker to remain silent.

His previous credits include BROADCHURCH and HUMANS, which became Channel 4's most successful original drama in over 20 years when it aired in 2015. After directing two episodes on series one, he was asked back a year later to direct the lead block of the second series for Kudos and AMC.

It was on graduating from the National Film and Television School in March 2013, that Lewis embarked on directing his first TV project, directing with two episodes of the final series of BAFTA-winning C4 show, MISFITS. He followed this up by directing the first four episodes of Russell T Davies’s new E4 show, BANANA, and was named a Broadcast Magazine Hotshot 2014 for his work on both shows.

His short films CHARLIE SAYS and ECHO, made whilst studying his MA in Directing Fiction at the NFTS, screened at a host of international film festivals, picking up various awards including a National Film Award for Best Short.

Lewis has a host of projects in development including THE FICTIONAL MAN, an adaptation of Al Ewing’s book, with The Forge, as well as feature film projects, BULLY, HIM and PLAYING DEAD.

DES has been nominated twice at the 2021 International Emmy Awards, including Best TV Movie/Mini-Series.

"The performances of Bean and Graham are, even though we have come to expect brilliance from them both, astonishing. So, too, are those from everyone in smaller roles, none of which is underwritten or sketchy, and who thicken the drama into something more profoundly moving and enraging at every turn.” The Guardian, Lucy Mangan

“…compelling television, with a premium cast and written like a punch to the face. In a good way.” The Times, Carol Midgley

“Time is a necessary lesson on the British prison system and a masterclass in acting.” The Metro, Billy Schwabb Dunn

“Rare it is to watch a drama about a serial killer that leaves you feeling as though the victims have been done a service. In the end, perhaps the greatest accolade that can be given this sensitive, finely worked piece is that Nilsen himself, attention-seeking narcissist though he was, would surely have hated it.” Lucy Mangan, The Guardian.

“Superb: restrained, too, given the subject matter and sensitivities, and all the better for it.” Euan Ferguson, The Guardian.