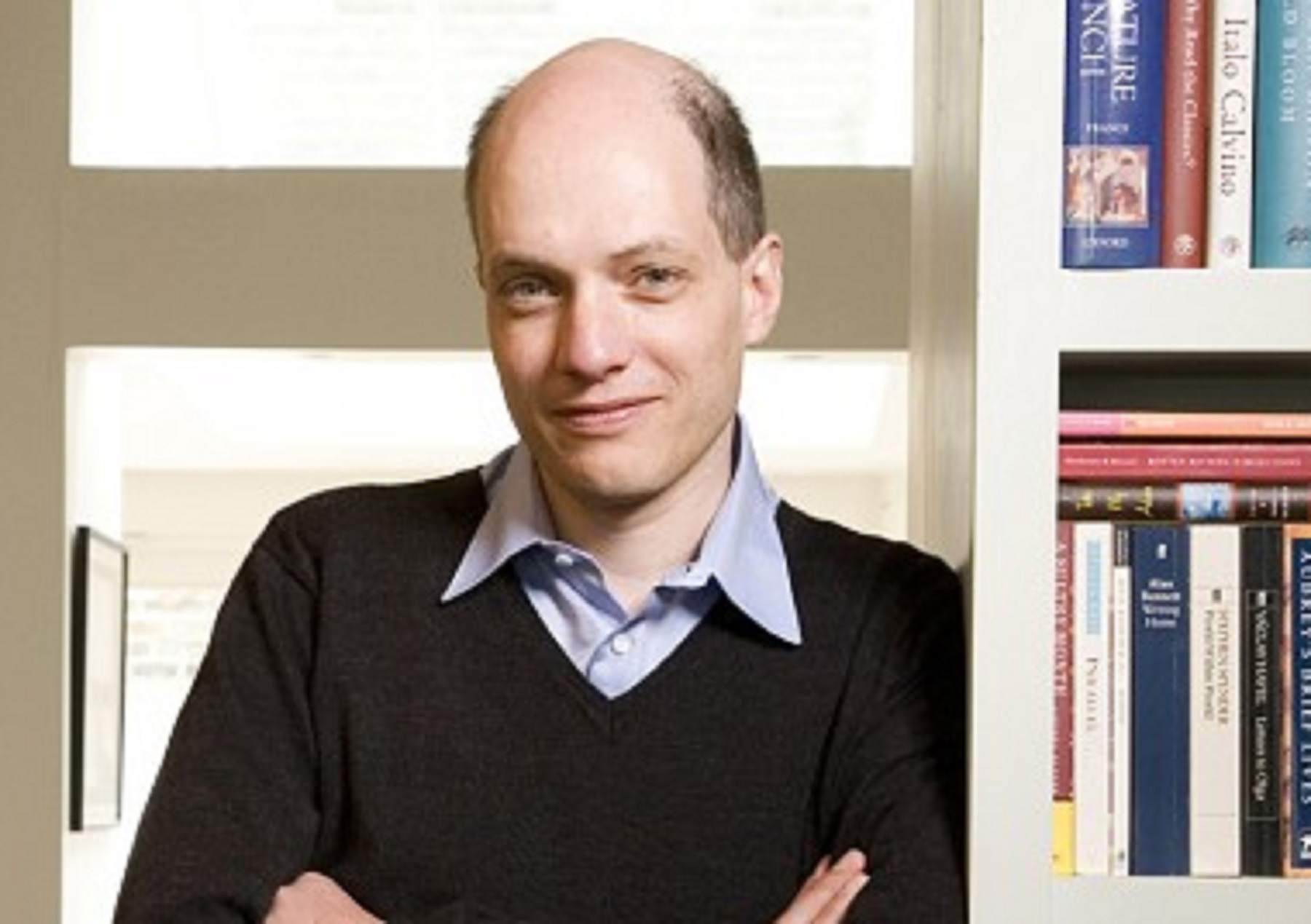 Alain de Botton was born in Zurich, Switzerland in 1969 and now lives in London. He is a writer of essayistic books that have been described as a ‘philosophy of everyday life.’  He’s written on love, travel, architecture and literature. His books have been bestsellers in 30 countries. Alain also started and helps to run a school in London called The School of Life, dedicated to a new vision of education.

The Course of Love
Hamish Hamilton
What does it mean to live happily ever after? At dinner parties and over coffee, Rabih and Kirsten's friends always ask them the same question: how did you meet? The answer comes easily -- it's a happy story, one they both love to tell. But there is a second part to this story, the answer to a question their friends never ask: what happened next? Rabih and Kirsten find each other, fall in love, get married. Society tells us this is the end of the story. In fact, it is only the beginning. From the first thrill of lust, to the joys and fears of real commitment, to the deep problems that surface slowly over two shared lifetimes, this is the story of a marriage. It is the story of modern relationships and how to survive them. Playful, wise and profoundly moving, The Course of Love is a delightful return to the novel by Alain de Botton, twenty years after his debut Essays in Love.
The News
Hamish Hamilton
The news is everywhere, we can’t stop checking it constantly on our screens, but what is it doing to our minds? The news occupies the same dominant position in modern society as religion once did, asserts Alain de Botton – but we don’t begin to understand its impact on us. In this dazzling new book, de Botton takes 25 archetypal news stories – from an aircrash to a murder, a celebrity interview to a political scandal – and submits them to unusually intense analysis. He raises questions like: How come disaster stories are often so uplifting? What makes the love lives of celebrities so interesting? Why do we enjoy politicians being brought down? Why are upheavals in far off lands often so… boring? De Botton has written the ultimate manual for our news-addicted age, one sure to bring calm, understanding and a measure of sanity to our daily (perhaps even hourly) interactions with the news machine.
Art As Therapy
PhaidonThe purpose of this book is to introduce a new method of interpreting art: art as a form of therapy. It's the authors' contention that certain art works provide powerful solutions to our problems, but that in order for this potential to be released, the audience's attention has to be directed towards it in a new way (which they demonstrate), rather than towards the more normal historical or stylistic concerns with which art books and museum captions are traditionally associated. The authors propose that the squeamish belief that art should be 'for art's sake' has unnecessarily held back art from revealing its latent therapeutic potential. This book involves reframing and recontextualising a series of art works from across the ages and genres, so that they can be approached as tools for the resolution of difficult issues in individual life.
Religion for Atheists
2012
Hamish Hamilton
What if religions are neither all true or all nonsense? The boring debate between fundamentalist believers and non-believers is finally moved on by Alain’s book Religion for Atheists, which argues that the supernatural claims of religion are of course entirely false – and yet that religions still have some very important things to teach the secular world.
How to Think More About Sex
2012
Macmillan
In this rigorous and supremely honest book Alain de Botton helps us navigate the intimate and exciting – yet often confusing and difficult – experience that is sex. Few of us tend to feel we’re entirely normal when it comes to sex, and what we’re supposed to be feeling rarely matches up with the reality. This book argues that 21st-century sex is ultimately fated to be a balancing act between love and desire, and adventure and commitment. Covering topics that include lust, fetishism, adultery and pornography, Alain de Botton frankly articulates the dilemmas of modern sexuality, offering insights and consolation to help us think more deeply and wisely about the sex we are, or aren’t, having.
The Pleasures and Sorrows of Work
Hamish Hamilton
The Pleasures and Sorrows of Work is an exploration of the joys and perils of the modern workplace, beautifully evoking what other people get up to all day – and night – to make the frenzied contemporary world function. With a philosophical eye and his characteristic combination of wit and wisdom, Alain leads us on a journey around a deliberately eclectic range of occupations, from rocket science to biscuit manufacture, accountancy to art – in search of what make jobs either fulfilling or soul-destroying.
A Week at the Airport
Profile Books
In the summer of 2009 Alain de Botton was given unprecedented, unrestricted access to wander around Heathrow, one of the world’s biggest airports, having been appointed its Writer-in-Residence. He spoke with everyone from airline staff and senior executives to travellers passing through, and based on these conversations he produced this extraordinary account of life at an airport and what it says about modern existence.
The Architecture of Happiness
Hamish Hamilton

The Architecture of Happiness starts from the idea that where we are heavily influences who we can be – and argues that it is architecture’s task to stand as an eloquent reminder of our full potential. Whereas many architects are wary of openly discussing the word beauty, the book has at its centre the large and naïve question: ‘What is a beautiful building?’ It amounts to a tour through the philosophy and psychology of architecture, which aims to change the way we think about our homes, streets and ourselves.

Status Anxiety
Hamish Hamilton
We care about our status for a simple reason: because most people tend to be nice to us according to the amount of status we have (it is no coincidence that the first question we tend to be asked by new acquaintances is ‘ What do you do?’). With the help of philosophers, artists and writers, the book examines the origins of status anxiety (ranging from the consequences of the French Revolution to our secret dismay at the success of our friends), before revealing ingenious ways in which people have learnt to overcome their worries in their search for happiness.
The Art of Travel
Hamish Hamilton
The Art of Travel is a philosophical look at the ubiquitous but peculiar activity of travelling ‘for pleasure’, with thoughts on airports, landscapes, museums, holiday romances, photographs, exotic carpets and the contents of hotel mini-bars. The book mixes personal thought with insights drawn from some of the great figures of the past. Unlike existing guidebooks on travel, it dares to ask what the point of travel might be - and modestly suggests how we could learn to be less silently and guiltily miserable on our journeys.
The Consolations of Philosophy
Hamish Hamilton
Socrates, Epicurus, Seneca, Montaigne, Schopenhauer and Nietzsche are read for the light their work can shine on certain great universal problems, among them, unpopularity, poverty, inadequacy, lovelessness and timidity. The book amounts to a guide to wisdom - as well as to the practical utility of philosophy.
How Proust Can Change Your Life
Picador
Marcel Proust, author of In Search of Lost Time, one of the longest novels of the twentieth century, was an authority on how to live a richer, happier, more successful life - although rarely happy himself. The author gives an affectionate view of the brilliant and often bizarre novelist, and an interpretation of his novel.
Essays in Love
Macmillan
Weaving in Aristotle, Wittgenstein, history, religion and Groucho Marx, the unnamed narrator charts the progress of his affair with Chloe; from lust, to tenderness, private jokes, anxieties and heartbreak. When the affair is over he swears off romantic love, until he meets Rachel.