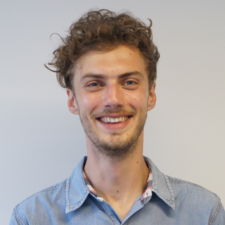 Simon is currently a Story Producer at Eleven Film, working across a number of drama and comedy projects on their slate. He recently script edited RED ROSE, produced by Eleven Film for the BBC / Netflix, after being Script Editor across the development of WHITE STORK. Simon was Script Executive on season two of ORIGIN for Left Bank/ YouTube Premium, after having worked on the first season.

Prior to this, Simon was Development Producer on THE ART OF FOLEY for Slim film + television/Channel 4, a series that stemmed from a run of three Comedy Blaps released in 2015 which Simon developed from their inception and subsequently script edited. Simon put together his own comedy slate at Slim, working with a number of exciting up-and-coming writers.

He started his career as a runner at Kudos, before leaving to join former MD Simon Crawford Collins at Slim in 2012. Following a stint as Development Coordinator, as well as serving as In-House Production Coordinator on Paula Milne’s single film LEGACY for BBC2, Simon was attached as Script Editor on the development of a number of comedy and drama series for Slim. There he worked intensively, on a range of ambitious projects for all of the major UK broadcasters.