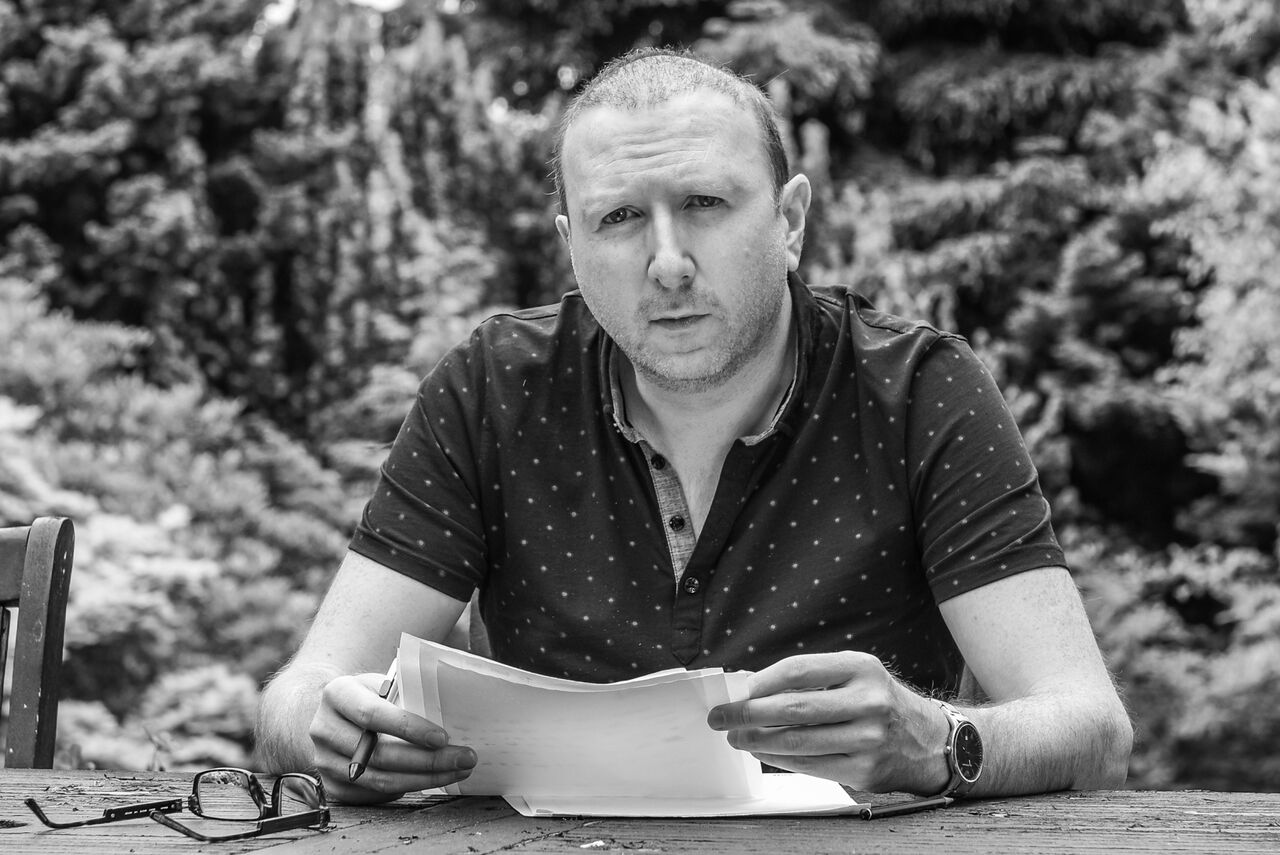 Recent work includes The Gold Killing, a two part thriller for Radio 4 which was Drama of the Week; And a new untitled stage play written with ACE funding and additional support from The Farnham Maltings and The Jerwood. The Moonflask a BBC Saturday drama for Radio 4 was repeated Easter Saturday 2015. His previous play The Takeover (BBC Radio 3) was nominated for The Prix Europa, Berlin and shortlisted for The Imison Award (2013).

The film version of his stage play 2Graves premiered at the Genesis Cinema, Whitechapel for the EEFF distributed via Trinity Film.

Several of his plays have been performed overseas. And in the UK he has had two transfers to London’s West End (The Arts and Trafalgar Studios respectively). His plays have been developed and/or produced at theatres including The Bush, The National Theatre Studio, AJP, Soho Theatre, Live Theatre Newcastle, The Old Vic, BAC and in Edinburgh at theatres including The Assembly Rooms and The Pleasance. Recent work has won a Curtain Call Award in Australia, and a Special Jury Prize at The ITSELF Festival in Warsaw.

The Bedsit is published by Faber and Faber and 2 Graves, The Dead Move Fast, The Man Who Fell Out Of Bed & Worlds End are all published by Oberon Books.

HOW TO BUILD A SUPERTOWER

“In Paul Sellar’s taut drama, Silver decides he wants a piece of the architectural action. And with the City backing his plans for an iconic new skyscraper, the mogul spies an opportunity to shore up his family’s future and slather the icing on his personal legacy. But Silver will nevertheless require all his ruthless deal making skills to avoid the manifold and unforeseen traps laid in his path...”

“The Gold Killing, Paul Sellar’s follow up to his acclaimed play The Moonflask, is a gritty two part thriller that cements his place within the vanguard of the genre.” Radio Times. Critic’s Choice.

“This two parter about mafia money and a gold mine hits a rich seam of drama and intrigue right from the off.” Susan Jeffreys. Daily Mail (Radio Choice)

“Robert Glenister packs a punch as likeable bruiser Joe in a role that fits him like a glove.” Tom Goulding. Critic’s Choice & Pick of the Day. Radio Times

“The Moonflask will light up your day… this drama by the talented playwright Paul Sellar will keep you guessing right up until the end…. a drama of bluff and double bluff, smoke and mirrors where nothing is quite as it seems.”  Jane Clinton Sunday Express

“There is no mistaking the signature of writer Paul Sellar – the master of deception layered upon deception” Moira Petty The Stage (Saturday Pick).

“An exhilarating plot… capers don’t crop up often on radio so this is a drama to cherish”. RADIO TIMES (RT Critics Choice)

“A group of job seekers pool their resources to pull off a heist." Recommended in MAIL ON SUNDAY (weekend magazine).

“An ingenious riff on recession-fuelled crime unfolds in The Moonflask… – as the audience become as deliciously duped as the characters… the action gives way to a thrilling heist, and getaway and yet more astonishing twists….” Moira Petty The Stage & Television Today

“Plotting doesn’t come any cleverer than in The Takeover, another success from Radio 3.” Moira Petty The Stage

“...an ingenious tale of the soft underbelly of business: double-double-cross and then some”  Martin Hoyle Financial Times (Critic’s Choice/Weekend Choice)

“The twist at the end is both surprising and moving… A well constructed story, beautifully told.” Judges at BBC Audio Drama Awards (2013)

“The genius of the writing...  humour flashes through the piece like lightning… a stunning drama.” Patrick Marion What’s On (Five stars & Critic’s Choice)

“A blistering script… A joy. A bullseye!” Sarah Hemming The Express

“The Arts reopens with a theatrical cracker in 2 Graves. A rarity – a modern verse drama that works.” Paul Taylor The Independent

“A fascinating piece of contemporary verse" Paul Vale The Stage

“An intriguing play with cracking dialogue… confirms its author’s growing reputation for chronicling the feel of 21st century life.” Jeremy Kingston The Times

“A thrilling hour of drama. …the play ends with two quite brilliant twists that had me gasping in admiration. Paul Sellar has turned into a writer we can cherish” Lloyd Evans The Spectator

“Succeeds as both comedy and as thriller… keeps you guessing right up to the end.” The Scotsman (Critic’s Choice)

“The script is both eloquent and poetic. This comic psychological whodunit is a must for all lovers of the macabre.” Jonathan Preminger The Evening News

“A Machiavellian play with enough labyrinthine twists to fox Theseus… Laughter is uncomfortable but unavoidable.” Zoe Green The Independent

“A highly charged political play because the personal stakes are so high… thrilling… the sustained dramatic tension is stunning.” Simon Reade ​Time Out (Critic’s Choice Season)

“Cleverly crafted play involves us not just as a thriller, but as a thought provoking study of fear and idealism” Alison Huntley Times Literary Supplement

“Also recommended is this taut little play; essentially a thriller, and a good one, with some clever twists and a satisfying surprise ending.” John Gross The Sunday Telegraph

“I long to mention the closing moments. But this would be an unforgivable offence. I must not give away the end.” Jeremy Kingston The Times