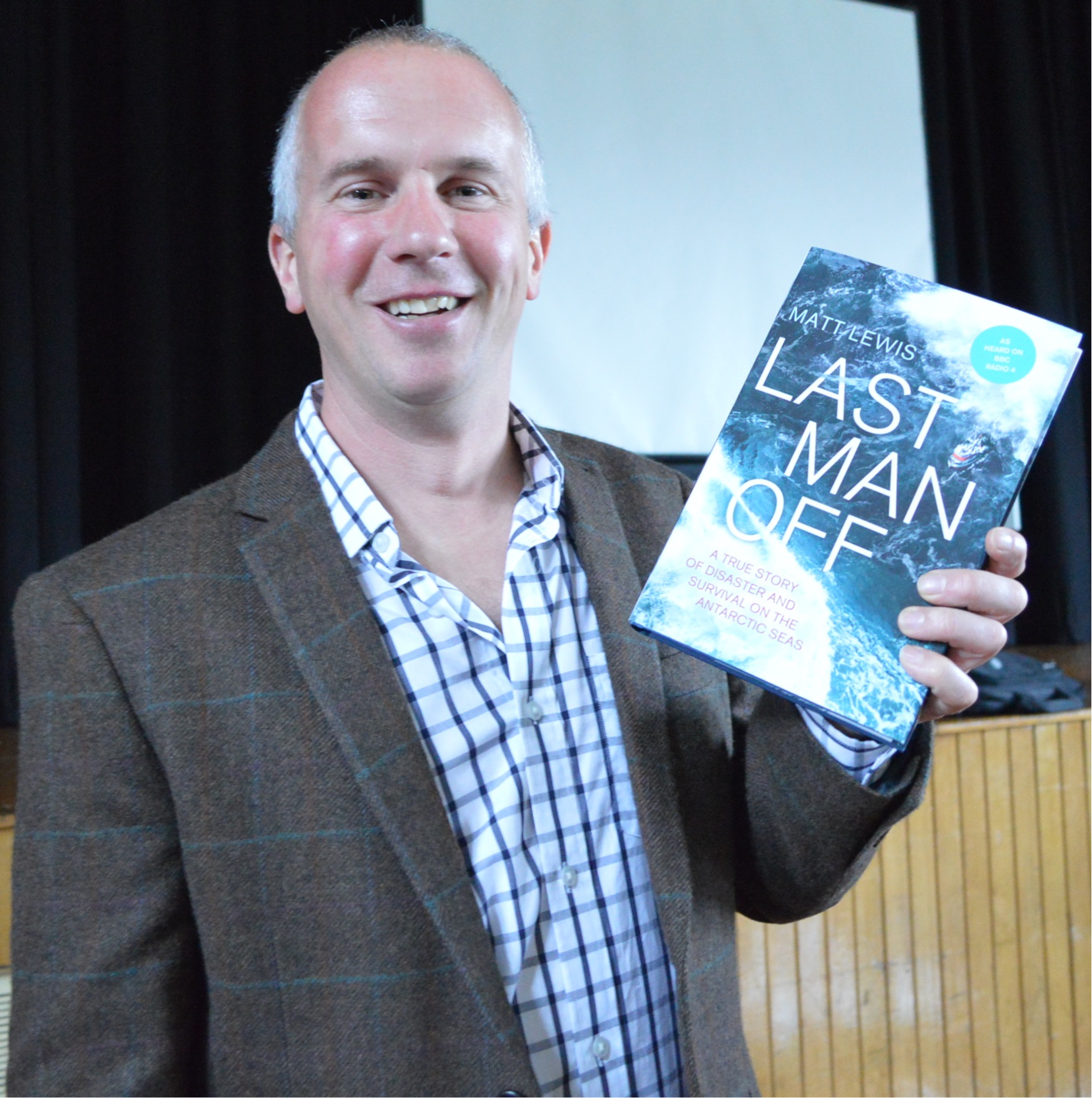 Matt Lewis was born in 1974 in Bristol, England. He studied Marine Biology at university in Bangor, Wales, and then Aberdeen, Scotland. The Sudur Havid was his first deployment as a Scientific Observer – he went on to complete another deployment (without sinking) before moving on to a warmer, drier career. A decade and a half’s work in biology has taken Matt from Sabah to South Georgia to Canada to Kenya, allowing him to climb mountains, visit hospitals with rare tropical diseases, and learn to swear in Afrikaans.

He now lives in Aberdeen with his wife and two children, and runs his own business taking tropical bugs and reptiles into schools to encourage children to be interested in wildlife and conservation.

But when a perfect storm engulfs the boat, hundreds of miles from land or rescue, Lewis’s dream becomes a nightmare. Facing freezing temperatures, deadly swells and towering waves as high as houses, the crew are almost swept overboard. Yet the captain refuses to act. With the hull flooding by the minute, and chaos spreading on deck, Lewis must take matters into his own hands.

What follows is an astonishing story of human courage, folly and tragedy. Lewis leads the crew to abandon ship onto three life rafts. Saving the life of the captain, he is the last man off the sinking boat. But the raft he escapes on is sinking too, and hypothermia is setting in.

Thirty-eight men set out. How many will return?

"This is brilliant . . Told with terrifying detail and heartfelt compassion" Dermot O'Leary

"A dramatic tale of survival in one of the most brutal situations on earth. Feels like reading the diary of a doomed man . . . so personal and chillingly real; totally takes you there in a way that is not always comfortable" Steve Backshall

"Reads like a sinister version of The Perfect Storm...Thrilling, compelling, unsettling, rewarding . . . This breakneck race of a book isn't just required reading for fans of waterborne peril; Harvard MBAs could also scour the pages as a case study in dysfunctional workplaces and woeful man management. It's like the Perfect Storm, but with gruesomely, even murderously, imperfect people" Sunday Times

"A thrilling, horrifying and compelling portrait of human survival. Colossal terror unfolds on every page" The Bookseller, Books of the Year

"For his compelling account of the hardships of fishing in remote Antarctic waters, and of what it means to abandon ship in a severe storm with inadequate equipment and a crew unprepared for survival. The book is objective but non-judgmental in its descriptiveness, so heightening the true sense of disaster. The style makes the book accessible to a wide public, but it is also essential reading for seafarers, fishermen and yachtsmen, as it concerns attitudes to safety and survival. A truly life-affirming and influential work." The Mountbatten Maritime Award for best literary contribution - Certificate of Merit

“Lewis’s honesty about his own failings, and those of his crewmates, lends a compelling, genuine humanity to what could have been a staple survival tale. And that is why Last Man Off is, though a rapid read, also such a rewarding, unsettling and richly recommended one.” Sunday Times

“A frank and emotionally challenging account of a truly horrific accident on the high seas. The author writes in such a way that, although you know the outcome, it still has you on the edge of your seat.” Guardian

“As true-life tales of endurance and survival go, Matt Lewis's is one of the most dramatic in recent memory… Lewis's admirably spare and uncluttered style makes the drama come alive in visceral fashion… a story of survival against the odds that is simultaneously terrifying and stirring… Lewis's book deserves high praise.” Guardian

“Matt Lewis’s account of his experiences aboard a poorly maintained fishing vessel, which sailed into a catastrophic storm in the Antarctic in 1998, is a thrilling, horrifying and compelling portrait of human survival.  Colossal terror unfolds on every page.”Bookseller, Books of the Year

“A dramatic tale of survival in one of the most brutal situations on earth. Feels like reading the diary of a doomed man . . . so personal and chillingly real; totally takes you there in a way that is not always comfortable.” Steve Backshall

“This is some tale, it really is.  I don’t know quite where to start.” Saturday Live, BBC Radio 4

“It is an amazing story.” Eamonn Holmes, This Morning

“Last Man Off reads as intensely true to the experience … Any distance in time has only lent sharpness to the account.  The steady unaffected rhythm of Lewis’s prose somehow recalls The Rime of the Ancient Mariner … all of this Lewis delivers with plain frankness, no mocked-up emotion.” Brian Morton, Herald

“A harrowing high-seas, high-stakes adventure … The narrative is an emotionally charged and authentically frightening personal account.  Lewis is especially effective describing the rapidly deteriorating conditions aboard ship, in conjunction with the heightening terrors welling up inside his head … Darkly exhilarating.” Kirkus Reviews

"What unfolds in crisp and descriptive prose is a harrowing account of life at sea … When disaster strikes, he speeds up the pace so that readers wind up in a can't-turn-the-page-quick-enough marathon to find out what the next giant wave brings for these heroic men. For those who enjoyed Moby-Dick or The Perfect Storm, Lewis has written a great addition to the library of books that pit men against the sea.” Shelf Awareness

“In the author’s note at the beginning of the book he notes, “writing has not been the heading process I had hoped for,” and this, unfortunately for Lewis but good for us, is another reason why this book is such a good read. It’s a refreshing change from the redemption and healing that has been a focus in many memoirs of late. Even if he didn’t experience a perfect storm, he does manage to find a perfect balance in telling his story." Omnivoracious