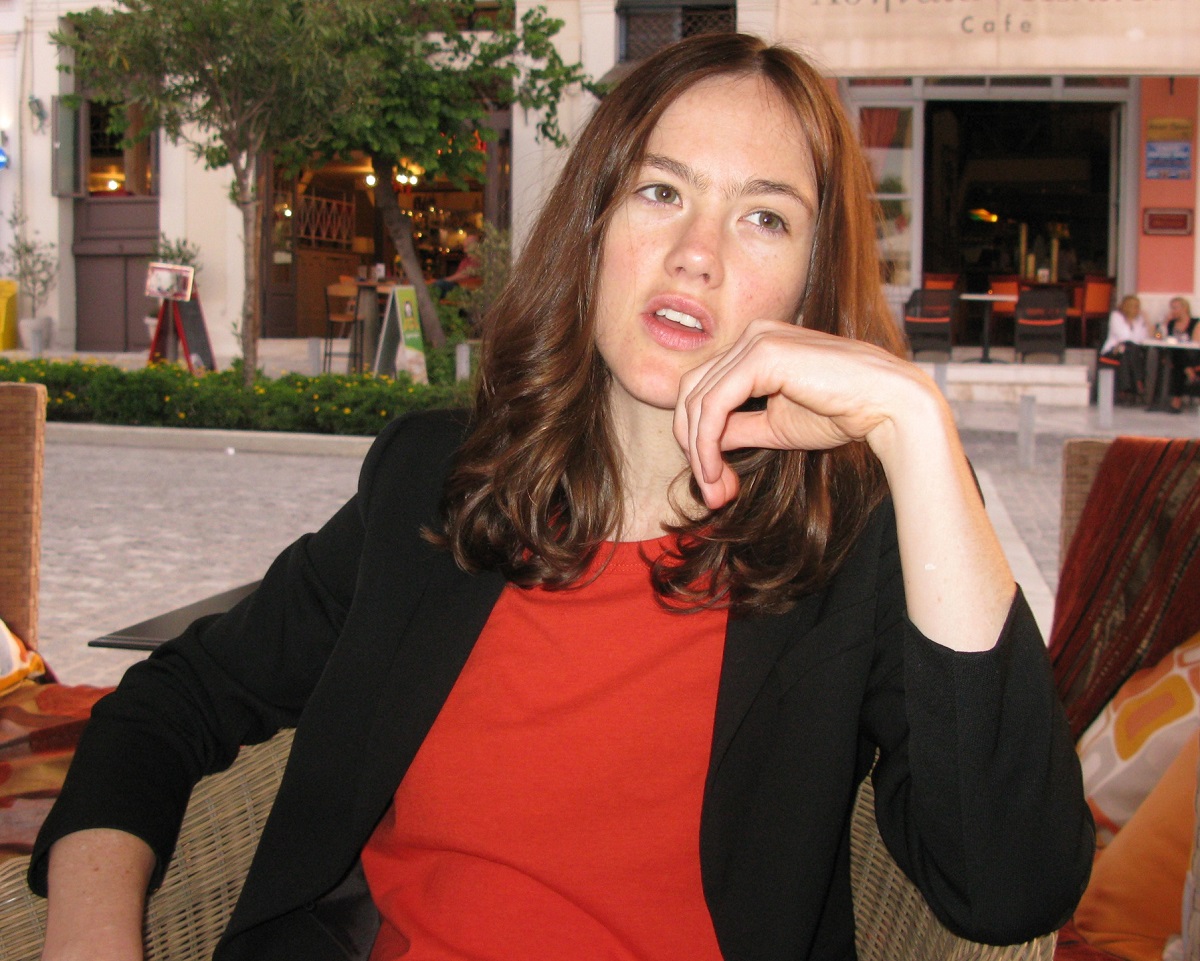 Katharine Kilalea grew up in South Africa and moved to the UK to study for an M.A. in Creative Writing at the University of East Anglia. Her debut poetry collection, One Eye’d Leigh (2009), was shortlisted for the Costa Poetry Award and longlisted for the Dylan Thomas Prize for writers under 30. She worked for many years in an architecture practice and is completing a PhD at the University of Sheffield on the experience of space in poetry. She lives in London.

Katharine's debut novel, OK, MR. FIELD, was published in early June 2018 by Faber & Faber, and in the US in early July 2018 by Tim Duggan Books.

'Katharine Kilalea is to literature what ceramic knives are to cookery. This is a whole new type of writing and it will cut through everything.' Emily Berry

'[A] bewitching debut novel [...] [Kilalea] seems more interested in exploring the possibilities of language than in telling a cracking yarn or constructing anything so mundane as a plot. Yet with prose of this quality it is hard to protest, and Mr Field is in any case good company — irascible and weird, but endearing in his attempts to duck the loneliness waiting for him at every turn.' The Sunday Times

'[A] dazzling debut novel [...] [Kilalea's] experiences [in poetry and architecture] inform OK, Mr. Field, whether through her luminous use of language, her descriptions of Cape Town or her understanding of how space can be constricting and expansive, vertiginous and comforting, at the same time. Details are observed intimately, like pin-pricks.[...] [Mr. Field's] voice is detached and wry, not unlike a character from a story by Samuel Beckett. [...] As with much of Beckett's writing, OK, Mr. Field is often bleakly comic. But at moments it is also tender (without being sentimental), depicting the strange dream-like inner life of someone who is terribly lonely. [...] [Kilalea is] a striking new voice in fiction.' The Economist

'[A] startlingly good first novel [...] it is hard to convey the shocking accuracy of Kilalea’s prose, which, ultimately, is what makes this novel so riveting. The absolute correctness of the vocabulary she uses makes one realise how pretentious and unnecessary the language in much contemporary fiction is. This would be nothing, of course, if Kilalea didn’t have anything to say, but she has so much to convey about loneliness, madness and mortality. The literary critic Harold Bloom has said that what makes Kafka’s Metamorphosis so disorientating is its strange familiarity, and OK, Mr Field has this by the bucketload. This curious, short (it is just 200 pages long) book feels as uncanny as Kafka or Beckett.' Alex Peake-Tomkinson, Spectator

'[A]n enthralling meditation on absence and presence, and how we seek to shape the emptiness that surrounds and pervades our lives [...] we enter a seductive process of deconstruction, as the increasingly isolated Field becomes unmoored and is set adrift on an undifferentiated sea of experience. [...] Kilalea’s impressionistic prose invites comparison to the attentive introspection of Woolf, the existential erosion of Beckett and the reveries of Proust. Its effects might be compared to those of listening to ambient music, or of gazing at a Rothko painting as meanings emerge from the haze. [...] [F]or those who fully surrender to Kilalea’s uncanny prose poetry, this is an unforgettable voyage, slip sliding away into the unknown and unknowable.' The Seattle Times

'An uncannily memorable, even mesmerising, debut. [...] OK, Mr Field shapes its architectural components into a haunting and original design. Katharine Kilalea smartly avoids the usual paradigm of hubris-and-nemesis – perhaps as ancient as the Tower of Babel – that clings to stories of proud buildings and those who create or inhabit them. [...] Although lucidly, indeed beautifully, written, Kilalea’s novel poses question that belong to philosophy – and poetry – as much as architecture itself. [...] As it surveys the porous, shifting boundaries between mind and world, the dialogue between our senses and our spaces, OK, Mr Field distils into vivid image and impression the sort of ideas that seldom find a place in mainstream fiction. Kilalea’s approach reminded me not only of the philosophy of Heidegger but Bachelard’s great exploration of the house as the frame for consciousness, The Poetics of Space. But her sensuous, sculpted prose keeps her narrative lean and spare, though always enigmatic.' Boyd Tonkin, The Arts Desk

'It’s unusual, right now, for a first novel narrated in the first person to be so resolutely unautobiographical, especially when it’s by a debut female novelist flouting the canons of identity that would normally define her. [...] The question of pleasure – should we expect it in our buildings and our books? – is one that we seem encouraged to interrogate here. Certainly there are pleasures offered by this teasing narrative, which come to us because of rather than in spite of their withholding. The most obvious lie in the small, precise moments of observation, reminiscent of Kilalea’s poems. [...] [It becomes] almost thriller-like – a remarkable achievement, given that the action is still all occurring inside the head of so flattened a character. [...] Both in its power to unsettle and its quest to establish a relationship to character that isn’t based on understanding, this is a strikingly original piece of writing.' Lara Feigel, Guardian

'[An] evocative novel. Mr. Field is sleeping when the book starts. He is sleeping when a train crash shatters his left wrist. He is sleeping when his wife leaves him. The scant story he narrates alternates between stark reality and a dreamlike limbo, specifics and vagueness. [...] [Kilalea] conjures from precise prose and elements as basic and fraught as Tarot card images—sea, widow, wife, round tower, box house, sad man—a kind of tone poem [which] ultimately resonates well beyond one man’s depression. An auspicious debut that challenges the reader to follow the progress of mental distress and bravely offers little relief from the painful sight.' Kirkus, starred review

'Kilalea's striking, singular debut constructs an eerie world of replicas, repetitions, and doubles that contrasts the utopian ideals of a modernist house with the irreversibly damaged soul who inhabits it. [...] Kilalea maintains a balance between formal control and the irrational mystery of a man who is a "stranger to [him]self." The result is a disorienting and enthralling descent into one man's peculiar malaise.' Publishers Weekly, starred review

'An exquisitely uncomfortable study of ennui. [...] as the novel progresses, the house almost starts to become, if not quite a character in its own right, then at least a stage set which seems to play a suspiciously active role in shaping Field’s moods. [...] [Field’s obsession with Hannah Kallenbach] is expertly handled by Kilalea, to the extent that even when it plumbs the depths of improbable strangeness it is never less than believable. An acute and thoroughly fascinating study of a mind on the point of collapse, OK, Mr Field is a wonderfully bold and incredibly assured debut, and when the words “eagerly anticipated second novel” inevitably find their way into the publicity material for Kilalea’s next book, they will be richly deserved.' The Scotsman

'[An] enigmatic, often dream-like and brilliantly funny debut novel [...] Mr Field himself has been compared by early reviewers to a Beckett character, but he might have more in common with the creations of Austrian writer Thomas Bernhard. These tend to be deeply cultured perfectionists who keep circling back, in their minds and in the movement of their sentences, to a single obsession or plangent regret. In Ok, Mr Field, a Bernhardian air of repetition works nicely: a dullness of narration which is also beautiful and perfectly intentional.​ [...] Kilalea has managed to create a perfectly poised, funny and mad book about chronic loneliness, the struggle to connect with other people, or even feeling estranged from oneself.' Irish Times

'OK, Mr. Field is a novel brave in its own intelligence and subtlety. The writing is quietly beautiful and the narrator's voice strange and compelling.' Sarah Moss

'One of the most original, beautifully-written and convincing works of fiction I have read in a long time, with a narrative that is both mysterious yet compulsive. Utterly marvellous.' George Szirtes

'OK, Mr Field is an enriching piece of writing. It is a novel of states of mind, it has a serious sense of humour, it glints like the best of Woolf or Bernhard, it is full of stories and moments of surprise. You’ll want to read it in one go.' Daisy Hildyard

'OK, Mr. Field is a beautiful novel - deeply felt, inventive, and inspiring in its form, insights, and originality.' Yasmine El Rashidi, author of Chronicle of a Last Summer