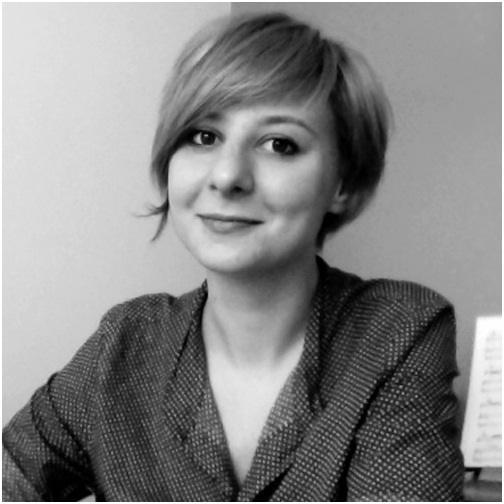 Kate lives and works in Birmingham (near the chocolate factory). She studied illustration at Falmouth College of Art, and went on to work for two years as a children’s print designer at a studio in Northampton, whilst working freelance on children’s books and greetings cards.

She has exhibited with her good chums Girls Who Draw and Inkygoodness across the UK, and had a jolly good time painting up a totem pole for the Pictoplasma Character Walk exhibition 2011.

Kate’s first picture book THE GREAT SNORTLE HUNT, written by Claire Freedman, was longlisted for the 2013 Kate Greenaway Medal. Since then Kate has provided illustrations for a number of bestselling picture books including THE NAUGHTIEST GIRL (Hodder Children's Books), THE WISHING-CHAIR (Egmont) and the BEST FRIENDS' BAKERY (Orion Children's Books) series.

These children and animals are all very different to each other. Some are big, some are small. Some are gentle, some are rough. Everyone is playful, but who's the best at hiding? One thing's certain: they all love a good bedtime story! The perfect picture book for little ones who are just beginning to make sense of their place in the world.

Lewis Carroll's classic Wonderland returns, and this time it's Santa's turn for an adventure there! Featuring the Queen of Hearts, the March Hare and the Mad Hatter, it's time for a tea party with reindeer and lots of Christmas fun!

It's the Night Before Christmas in Wonderland, but as usual the Queen of Hearts is not expecting any presents. Many years ago, when she was still a Princess, she wrote to Santa Claus but the letter never arrived. Ever since, bitter at the non-arrival of her longed-for present, she has hated Christmas. Now the lost letter has turned up in Santa's workshop and he has decided better late than never – he and the reindeer will deliver the present.

The Princess is now a Queen and with each passing year she has hated Christmas more, banning snowmen, then tinsel, mince pies and finally, good cheer. Will Santa be able to put the Merry back into Christmas in Wonderland?

Written by debut author Carys Bexington and illustrated by star artist Kate Hindley, The Night Before Christmas in Wonderland is a children's classic in the making.

Ned the knight always does exactly what he's told. When his parents ask him to pick up his toys, dig up the cabbages, or go to bed on time, he does it all with a smile. And when the dragon swoops into town every night, Ned always runs inside just as he's asked. But one morning Ned says "NO!" He will not help his dad find his shield, his arrow, or his bow, and that night, he refuses to go inside. After a surprising encounter with the dragon, will he change his tune?