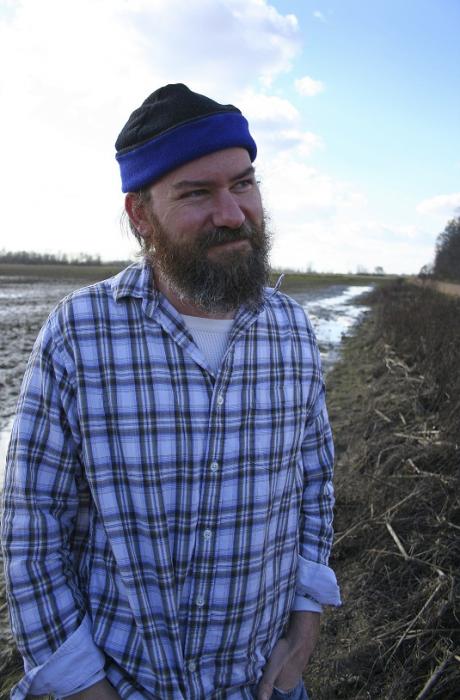 Jamie, 38, lives in the Mississippi Delta, where he moved in 2006 to establish an independent bookstore, Turnrow Book Co. Before that he was a bookseller, events coordinator and radio show producer at the renowned Square Books in Oxford, Mississippi. SOIL is his first book. I’m handling this on behalf of Jim Rutman at Sterling Lord Literistic, who’s sold the novel at auction to Marysue Rucci at S&S in the States.

An idealistic environmental scientist moves his wife and young son off the grid, to a stretch of river bottom farmland in the Mississippi hills, hoping to position himself at the forefront of a revolution in agriculture.

Within a year, he is ruined.

When a corpse appears on his family's property, the farmer is convinced he's being set up. And so begins a journey into a maze of misperceptions and personal obsessions, as the farmer, his now-estranged wife, a predatory deputy, and a backwoods wanderer, all try to uphold a personal sense of honour.

By turns hilarious and darkly disturbing, Soil traces one man's apocalypse to its epic showdown in the Mississippi mudflats.

The Coen Brothers meet Crime and Punishment - with a Mississippi twist

"A slow-burning noir influenced by the Southern Gothic tradition, Soil is a hugely impressive debut... Kornegay is superb at evoking the minutiae of small-town America, and despite their different settings - Soil vividly depicts the sweltering Mississippi Delta - this heart-breaking tragedy bears comparison with Scott Smith's A Simple Plan and Jim Thompson's The Killer Inside Me.!" Irish Times

"part Greek tragedy and part darkly comic Deep South romp. The language which Kornegay uses to describe the mud plains of the Mississippi is wonderfully evocative with a suspense-filled finale which will make your heart pound" Press Association

"Unnerving but touching, dark yet hopeful, gritty but oh, so smooth; Soil is the deeply human story of one man's personal apocalypse. Mississippi independent bookstore owner Jamie Kornegay has penned a debut novel that will establish him as a major force in the pantheon of elite Southern writers. I spent most of the time wondering why he didn't write a book sooner. It's not fair to keep something so wonderful away from readers. Would it be weird if I read it again?" Book Riot

"Peppered with a great cast of odd and unusual characters, Kornegay delivers a novel above and beyond the Coen Brothers comparisons... Moving and affecting this book will suck you in from the opening pages. It will have you wincing and pleading, hoping and laughing and is a highly accomplished debut from a distinctive new voice in American fiction" Jon Page Pages and Pages Bookstore

"a very assured first novel and a pleasure to read. The portraits of the leading characters are entirely convincing and the interactions carry a sense of impending calamity that propels the narrative to the final showdown. Jay in particular is well-drawn: an intelligent, thoughtful man frustrated by the trivial obsessions of modern culture and the failure of his enthusiasms, on the borderline of complete breakdown... Soil is very good stuff, and I look forward to seeing more from Jamie Kornegay before too long" Crimereview.co.uk

"Jamie Kornegay is a fantastic writer, and has created a darkly funny tale of murder, accusation and paranoia with some crazy-funny dialogue thrown in for good measure. If you liked Fargo you'll love Soil" Reading Room With A View

"A slow burner at first, it soon builds into a page-turning crescendo and a suspense-filled finale that will leave you opened-mouthed in horror" South Wales Evening Post

Marked by wry humour, unforgettable characters, and riveting suspense, Jamie Kornegay's Soil is a spellbinding Greek tragedy played out against the backdrop of the choked river-bottoms, sprawling fields, and dusty roads of the Mississippi Delta. A brilliant, haunting portrait of the havoc one desperate man's decisions and dreams can wreak upon himself and those around him. This remarkable novel springs from rich earth indeed, and the end result is a book that will leave readers reeling. Skip Horack, author of THE EDEN HUNTER