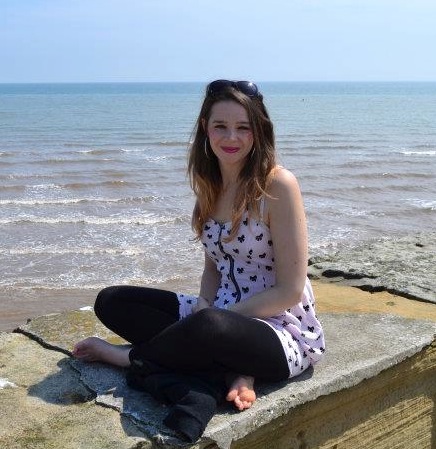 I have always been fascinated by miniature things: when I was young I spent my time making tiny clothes and houses and writing fairy letters. While at university I began to combine this fascination with my other passion for drawing and writing. I love to create miniature worlds out of paper and fabric and photograph them to make illustrations.

I do sometimes create illustrations using the normal method of pencil and paper too!

I studied illustration at Norwich University College of the Arts and then went on to do an MA in Children's Book Illustration at Cambridge School of Art.

My favourite books are the Dorrie books by Patricia Coombs.

Isadora Moon is special because she's different. Her mum is a fairy and her dad is a vampire and she's a bit of both. Isadora loves playing in the snow, especially when her creations come to life!
But snow magic can't last forever. Will she be able to save her new friends before they melt away?

With irresistible pink and black artwork throughout by author/illustrator Harriet Muncaster and a totally unique heroine with an out-of-this-world family, this is a beautiful, charming, and funny series of first chapter books. Perfect for fans of Claude, Dixie O'Day, and Squishy McFluff, Isadora Moon is the ideal choice for readers who want their magic and sparkle with a bit of bite!

It's almost time for the vampire ball, and Isadora can't wait! There's just one problem: she's got to compete in a talent show with the other vampire children. Isadora's talents aren't very vampire-y, what if the audience laugh at her? The show must go on, but will Isadora be brave enough to perform. . . ?

Isadora Moon is special because she's different. Her mum is a fairy and her dad is a vampire and she's a bit of both.
When Isadora is invited to stay at her friend Zoe's house she's so excited - she hasn't been to a sleepover before! There will be midnight feasts, and staying up all night, it's going to be so much fun!
And while she's there, Isadora and Zoe are going to work on their cake for a baking competition at school. But will they be able to resist adding a sprinkling of magic to their creation. . . ?