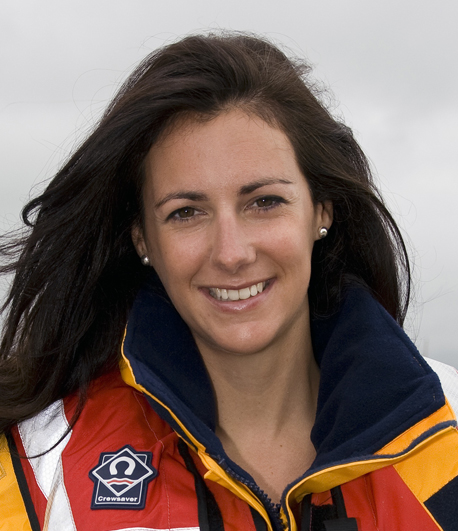 Hannah is an Adventurer who loves the Great British Outdoors (all of it: land, sea and air).  She believes fresh air and exercise makes you a happier and healthier person. Whether Hannah is half way up a mountain, sailing the seas or running in the countryside she has made it her mission to get the uninitiated to discover the joy of getting outside, active and joining in.

Hannah, first made a name for herself in the world of single-handed offshore sailing. Having sailed the Atlantic solo three times, Hannah is no stranger to a challenge both on and off the water. After achieving an outstanding second place in the Solo Atlantic race, Hannah turned her hand to broadcasting. Hannah has made a success of herself in a predominately man’s world and is continuing to build on this success via her broadcasting work as well as her work to get the nation fitter!

As part of the presenting team for the ‘London 2012 Olympics’, she proved herself on screen and landed her first adventure challenge show ‘Go Hard or Go Home’ which aired on Channel 5 in January 2014. Hannah has also presented for ‘BBC1’s Countryfile’ and in 2015 joined the presenting team on ‘BT Sport’, presenting the sailing coverage of the ‘America's Cup’ in both 2015 and 2016. The same year Hannah teamed up with Land Rover on 'Project Speedbird' which saw her beat the sailing world record for the fastest woman on water over one nautical mile.

‘Go Hard or Go Home’ was a 4 x 60 series produced by Channel 5’s in-house production arm, Hannah chose 16 members of the British public to take part in a life changing challenge. In just twelve weeks Hannah’s mission was to get her team to the start line of some of the world’s toughest physical endurance races, ready for the challenge of their lives. Hannah mentored unfit members of the public through the physical and mental pressures of tackling some of the most notorious sporting events on the planet.

Hannah equipped the competitors, including doctors; car dealers; pub landlords; and members of the Woman’s Institute, with the necessary skills to attempt events from ‘The World’s Toughest Canoe Race’ in Texas to ‘The Bone Breaker’, a 127mile cycle race across the Pyrenees; to a 71mile charity triathlon in California and a 41mile quadrathlon across the western coast of Ireland, with the reputation as the toughest race in Europe.

'Project Speedbird'  saw Hannah rise to the challenge of attempting to break a sailing world record to become the fastest woman on water over one nautical mile. The project held centre stage at the Science Museum in London for three days, with the public encouraged to discover the intricate science behind the boat, meet Hannah and learn about the record-attempt.

Hannah’s mission is to encourage, ambition, confidence, pride and wellbeing, across the country. When Hannah was competing she would experience incredible life defining moments, of setting herself a goal, working and working and eventually achieving that goal and it is this feeling that she wants others to experience.

With all this, Hannah still manages to find time to participate in adventure and fitness challenges across the country and globe. Hannah’s other adventures have taken her to every continent apart from Antarctica, on two wheels, on foot, on the water. No challenge is too big for Hannah. In 2014 Hannah took on one of her toughest challenges to date, and became the first person to complete the sailing 3 peaks challenge, solo.  This multi-discipline event saw her push the limits of human endurance and mental strength in this non-stop 5 day route normally completed by teams of 6.

The pinnacle of Hannah’s sailing career came in 2009 when she achieved a podium position in one of the world’s toughest single-handed ocean races, the ‘OSTAR’ (original single handed transatlantic race).

As the youngest female to compete in the 2005 edition of this race, Hannah’s 2009 performance proved not only her sailing ability but also her obvious talent for broadcasting and communicating. Winning the media prize (as voted for by the general public) in 2009, Hannah has gone on to forge a successful broadcasting career in both sailing and adventuring. Working regularly with BT Sport, BBC radio and regional TV Hannah also works as a live presenter and commentator on various international sporting events, including, the extreme sailing  and ‘The Volvo Ocean Race’ which takes place over 39,000 nautical miles of the world’s most treacherous seas via Cape Town, Abu Dhabi, Sanya, Auckland, Cape Horn, Itajaí, Miami, Lisbon, and Lorient.