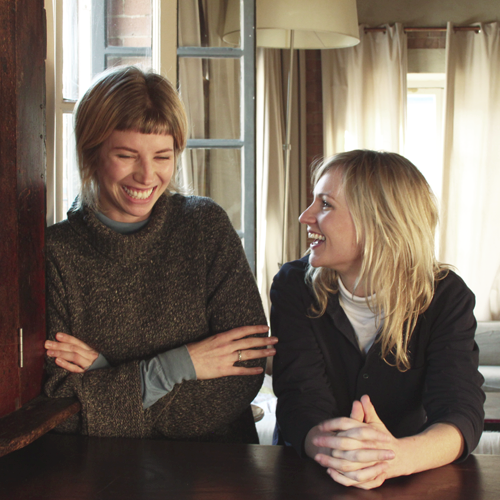 Hannah Daniel and Georgia Lee are writers who met studying English at UCL in 2005.

Hannah is an actor in a variety of TV dramas, starring as series regular in BBC’s Hinterland, and S4C’s Gwaith/Cartref. Other TV credits include Dad (BBC), Casualty and Pen Talar. Hannah has worked on stage at The Bloomsbury Theatre, Theatre 503 and The Arches, Glasgow. She has improv experience at both UCB and Groundlings Theatre in Los Angeles as well as her performances on improvised feature films Benny and Jolene, and BIFA nominated Black Mountain Poets.

Her bilingual comedy web series BUMRUSH (co-written with Daf Palfrey) was commissioned for development by S4C.

Georgia is a musician and songwriter signed with BMG and previously Island Records. Performing and writing in her own female led bands, as well as regularly songwriting and producing other artists. In the last year Georgia has been working as a writer-producer collaborating with a number of British and US production companies on dramas in development for TV and film.

Hannah and Georgia started working together as a team in 2016 to create their first original TV comedy drama CARDIFF IS THE CAPITAL OF THE WORLD. As well as writing the pilot and season one bible they co-directed a teaser for the show starring Hannah, alongside Aimee Ffion Edwards (Jerusalem, Luther) and Remy Beasley (Stella).

Other projects in development include original short films YOU HAVE REACHED YOUR DESTINATION and BURIAL, and TV comedy SUPERMODELS a series set amongst the teenage and not so teenage employees of a role playing and fantasy games store.