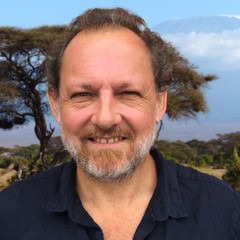 Giles Foden was born in 1967 and spent much of his early life in Africa. He was educated at Cambridge University, where he won the TR Henn and Harper Wood prizes in creative writing, rowed for his college, and represented the university against Oxford in pole-vaulting. He has worked as a barman, a builder, a journalist, an academic, and as a rapporteur for the European Commission. For ten years, he was an editor and writer on the Times Literary Supplement and the Guardian, and his writing has since been published in Granta, Vogue, Esquire, The New York Times and Conde Nast Traveller, where he remains a contributing editor. His fiction includes THE LAST KING OF SCOTLAND, LADYSMITH, ZANZIBAR and TURBULENCE – works which, according to Alan Massie writing in the Scotsman, ‘establish him as the most original and interesting novelist of his generation’.

THE LAST KING OF SCOTLAND won the Whitbread First Novel Award, a Somerset Maugham Award, a Betty Trask prize and the Winifred Holtby Memorial Award; it was made into an Oscar­winning feature film in 2006, starring Forest Whitaker, James McEvoy and Gillian Anderson. His non-fiction book, MIMI AND TOUTOU GO FORTH, which describes a bizarre naval battle on Lake Tanganyika in 1915 between British and German warships, was published to great acclaim in the autumn of 2004 and was a Radio 4 Book of the Week. Currently a professor in the creative writing department of the University of East Anglia, and an associate professor at the University of Maryland, Giles also works as a consultant for the Miles Morland Foundation, a charity that supports emergent African writers.

1996: in a Ugandan dive bar, the ‘freight dogs’ gather. An anarchic group of mercenary pilots from Texas, Russia, Kenya and Belgium who transport weapons between warring African nations, without allegiance.

And tonight they have a new recruit – Manu, a 19-year-old cowherd fleeing Congo’s bloody war.

Taken in by this band of unlikely brothers, he’s soon seeing his vast country from above and falling in love with flying.

But no matter how fast he flies, trouble follows closely behind. And when the past erupts back into this new life, Manu is forced to leave behind African skies for the chilly embrace of northern Europe.

Will Manu be able to reinvent himself yet again? And is Belgian volcanologist Anke Desseaux the answer to his problems – or simply another one of them?

From the writer of THE LAST KING OF SCOTLAND comes an unforgettable story of survival – about how to live and love after trauma, set against a backdrop of world-shaking conflict.

‘Each flick of the page . . . suggests the tick of a countdown. The book surges toward its end with enough surprises to grip Foden's readers and remind them that a life’s highest points are never quite as forecast.’ The New York Times Books Review

‘Foden is a formidable storyteller. A meticulous fusion  . . . that dazzles, coming off like an exhilarating fusion of Richard Powers and John le Carré.’ Publishers Weekly

‘Foden's most compelling and affecting novel since his debut, combining fascinating research with a high narrative tension.’ Mark Lawson, The Guardian

‘Rich, complex and immensely satisfying ... So convincing that it is hard not to feel that you are reading the real inside story.’ Evening Standard

‘The writing is so good that you don't doubt for a moment that what has been described did happen.’ The Observer

‘A page-turner that challenges the reader with ideas on every turn . . .  . another original and remarkable book.’ Scotland on Sunday

Praise for THE LAST KING OF SCOTLAND - FABER & FABER - JANUARY 2007

'A gripping tale of tropical corruption... This is a wonderful read, beautifully written, every description drenched with a sense of Africa.' Spectator

'As convincing and terrifying a portrait of a capricious tyrant as I have ever read. Foden captures with absolute fidelity the fascination of a figure like Amin.' Anthony Daniels, London Evening Standard