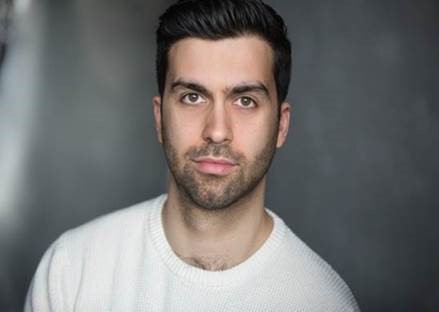 David is currently in rehearsals for the Royal Court’s upcoming production – A HISTORY OF WATER IN THE MIDDLE EAST. Over the summer of 2019, David filmed a regular role in the second series of STATH LETS FLATS Series 2. Both the series and David’s performance have received fantastic reviews.

David can also currently be seen in the new comedy series from the creators of PEEP SHOW for E4 - DEAD PIXELS - and in the lead role of Mario in Dave's hilarious new sitcom, SLICED. DEAD PIXELS has already been renewed for a second series, which will film in late 2019.

David played Will in Dominic Savage's rave-reviewed, hard-hitting drama for Channel 4 - I AM.

Recent credits include a lead role in comedy drama, DEATH ON THE TYNE, for UKTV and a role in Paul Feig's upcoming LAST CHRISTMAS.

Over the summer of 2017, David played Fabien in JOHNNY ENGLISH 3. Before that he filmed a role in the latest MISSION IMPOSSIBLE film and a lead role in comedy-horror, GAME OVER.

In 2017, David filmed a major role in the feature LOST IN LONDON - Woody Harrelson’s directorial debut, which also stars Owen Wilson and Willy Nelson, and which was the first film to ever be screened live. In 2016, David filmed roles in ITV’s FEARLESS,  Channel 4's THE WINDSORS and DAMNED, E4's AVATARDS and BBC1’s HOSPITAL PEOPLE, as well as the comedy pilot BACK with David Mitchell and Robert Webb.

David has also appeared in various award-winning films and television shows including THE INBETWEENERS MOVIE, FRESH MEAT and WHITECHAPEL. He played the role of Mario in the feature film NOBLE, which was released in Ireland and the US, and appeared in THE HUNTSMAN: WINTER’s WAR. David trained at Drama Centre London.

After appearing in two-hander LELA AND CO. at the Royal Court Theatre, which was one of Lyn Gardener's top 10 theatre productions of 2015, he then went on to appear in PINE at the Hampstead in late 2015/early 2016.

David played the lead role of Mush in IdeasTap's play MUSH AND ME which had a hugely successful run at the Edinburgh Fringe and was followed up by a run at the Bush Theatre.

"Mumeni's performance is outstanding, both in terms of his comic timing and in his versatility." ✭✭✭✭✭

Outside of his acting work, David is also the founder of Open Door, a non-profit organisation that helps talented young people who do not have the financial support or resources to gain a place at one of the UK’s leading drama schools. Open Door has achieved remarkable success since its inception in 2017. It won The Stage’s award for “Drama School of the Year” in 2019 and has changed the lives of hundreds of young people.

On the Balloon Diverse Writers Programme and developing a TV spec script for them.

"Two pints of lager and a cracking little play."

"There is not a single false note from the company - a celebration of love, life and, due to the show’s own sparkle, theatre.”

"The young ensemble is engaging an the writing sharp. A bravura site specific production."

“Event theatre young audiences relish. And it is the opposite of apathetic”

I'm Not That Kind Of Guy

“This was a deeply considered piece of writing, intelligent but scorchingly funny with it, a job very well done.”