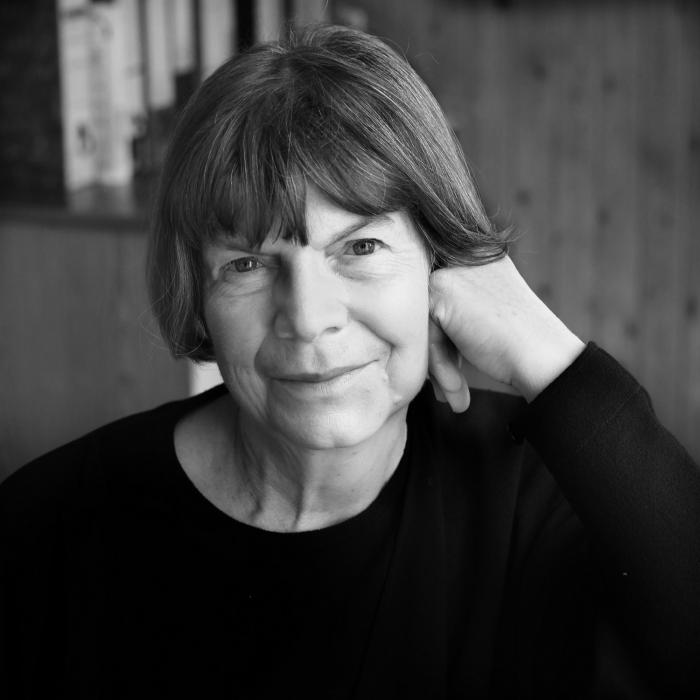 Dame Margaret Drabble was born in Sheffield in 1939 and was educated at Newnham College, Cambridge. She is the author of eighteen novels including A Summer Bird-Cage, The Millstone, The Peppered Moth, The Red Queen, The Sea Lady and most recently, the highly acclaimed The Pure Gold Baby. She has also written biographies, screenplays and was the editor of the Oxford Companion to English Literature. She was appointed CBE in 1980, and made DBE in the 2008 Honours list. She was also awarded the 2011 Golden PEN Award for a Lifetime’s Distinguished Service to Literature. She is married to the biographer Michael Holroyd and lives in London and Somerset.

Francesca Stubbs holds our hand as we take a walk through death and old age. Fran takes us to drinks with her dear friends, dropping off mouth-watering suppers for Claude, her ex-husband, warm and cosy in his infirmity, and visits her daughter, Poppet, holed up as the waters rise in a sodden West Country, as well as texting her son Christopher in Tenerife, dealing with the estate of his shockingly deceased girlfriend.

The questions of what constitutes a good death and how we understand it if we have lived well preoccupy this dark and glittering novel. With characteristic wit and caustic prose via some festive red merlot, The Dark Flood Rises dazzles and enthrals, entertains and asks existential questions in equal measure.

Praise for THE DARK FLOOD RISES

"Darkly witty and exhilarating" The Times

"With its echoes of Simone de Beauvoir and Samuel Beckett, this quiet meditation an old age seethes with apocalyptic intent . . . Brilliant" Guardian

"Ageing and dying in style . . . Margaret Drabble's sharply drawn characters look back on lives lived and forwards to achieving a good death" Observer

"Uplifting . . . Profound . . . Unforgettable . . . At its heart is the enormous question, how do we know if we've had a good life? " Sunday Telegraph

“The Pure Gold Baby is an unexpected gift from a great author. How do we treat the child who walks among us in a different way than most? In Margaret Drabble's hands the answer is with a depth of empathy few master. Fortunately for us, Drabble has spent a lifetime doing just that in exquisitely written prose” Alice Sebold, author of The Lovely Bones

“Extraordinary and intriguing” Sadie Jones, author of The Outcast

"Margaret Drabble, a master of the quiet novel, has spent half a century crafting sentences and finely measured paragraphs that give back the pleasure of a particular kind of spoken English – reserved and self-deprecating, sliced through with social acuity and knowingness." Financial Times

“Drabble richly recreates that place and that environment [1960's North London] . . .  Contained in the story, in fact, is a history of ideas about the mentally disturbed and the treatment of them. This is a tough assignment, and Drabble's brilliance appears here . . . while it reads very easily and seductively as a naturalistic novel, it slowly builds up a sense of wide horizons that one has never seen in quite the same way before” The Times

“Achingly wise ... gentled by compassion (admirers of Marilynne Robinson will find themselves very much at home in this book)." Wall Street Journal

“Avoiding melodrama, tragedy and sentiment, Drabble crafts Anna and Jess’s lives into a narrative that is both involving and unexpectedly rich. The end result is a magnificent novel that confirms Drabble’s status as a national treasure.” Daily Mail

“The tone is relaxed, even chatty, narrative mixed with reflection and observations on changes in manners and moral . . . What it offers, convincingly, interestingly, and often charmingly, is a picture of a changing world . . . Margaret Drabble has written a novel in which she has resisted the temptation to form it into a pleasing work of art, instead offering a picture of life as one thing after another. Yet it is a version of a good life that she very winningly offers us, a life irradiated by kindness” Scotsman

“Clear-eyed shrewdness, provocative intelligence and an insight into character underlined by a kind of anthropological dispassion ... a unique and profoundly stirring book.” Observer

“Compelling...The Pure Gold Baby is an intelligent book about the way we interpret our inner lives.” Sunday Times

“In 2009, Dame Margaret Drabble said that she would not write fiction again. Thankfully, that has not come to pass and her first novel in almost a decade demonstrates why it would have been such a loss. [Drabble’s] prose is graceful and flowing and Eleanor is an articulate and engaging narrator ... a moving testament to love, loyalty, and friendships between women. A poignant but ultimately uplifting tale.” Independent on Sunday

“A narrative that consistently prods at the idea of how we know what it is that we are seeing . . . Characters, plotlines and themes swirl and proliferate” Guardian

“This new novel by a tireless chronicler of our times returns to key Drabble themes, her voice as strong and shrewd as ever” Independent

“A moving and meditative novel… Drabble is so good at creating the whole, non-linear picture of life. The Pure Gold Baby is original and ultimately really affecting. I found a kind of somber bravery in the story of this unwavering, intelligent woman and her guileless and beautiful child. I'm so glad that Margaret Drabble, like her characters, just decided to keep on going.” Meg Wolitzer, NPR

“The book succeeds as both a social critique and a sensitive view of the agonies and joys of raising disabled children... Insightful and wise, The Pure Gold Baby chronicles the deep challenges of parenting under any circumstances – yet it also captures the almost unbearable vulnerability of being human.”  Boston Globe

“The Pure Gold Baby is a closely observed group portrait of female friends, a patient insight into the joys and pains of motherhood and an image of how society has changed and how it has not” Harper’s Magazine

“The Pure Gold Baby is as deep as it is wide: resonant, recursive and contemplative.” Kansas City Star

"This is an intimate look at a small family and its circle, told with wit, sensitivity, and deft knowledge of the household details of its setting. Drabble, the distinguished author of more than two dozen novels (e.g., The Radiant Way; The Seven Sisters) and works of nonfiction (The Oxford Companion to English Literature), is a masterly storyteller and a preeminent chronicler of modern life...Readers who yearn for well-crafted fiction full of thoughtful ideas and observations should welcome this heartily." Library Journal, Starred Review

“Written with compassion and bathed in a poignant glow” Stylist Magazine

“Drabble (A Day in the Life of a Smiling Woman, 2011, etc.) enfolds the moving personal story of a single mother’s care for her mentally disabled daughter within a somber narrative of aging families and declining social optimism…The Victorian explorer David Livingstone, William Wordsworth’s poetry, Auguste Rodin’s sculpture and Marcel Proust’s novels all play a part in Drabble’s deeply intellectual, though never pretentious consideration of our intricate connections and obligations to others. Thoughtful and provocative, written with the author’s customary intelligence and quiet passion.” Kirkus

“Drabble is in peak form in this marvelously dexterous, tartly funny, and commanding novel of moral failings and women’s quandaries, brilliantly infusing penetrating social critique with stinging irony as she considers what life makes of us and what we make of life ... Given Drabble’s standing as one of the giants of world literature, elevated attention will be paid to her first novel since The Sea Lady (2007).” Booklist, Starred Review

“Having announced in 2009 that she would stop writing fiction for fear of repeating herself, Drabble has, thankfully, had a change of heart. Here she offers a wrenching but clear-eyed look at the responsibilities of motherhood. Pregnant owing to an affair with a married professor, graduate student Jessica Speight gives birth to golden, glowy Anna. It soon becomes apparent that Anna will never be a normal child, and both character and reader must adjust to a different understanding of parenting.” Library Journal, "Barbara's Picks" Pre-Pub Alert

"Margaret Drabble has written a compelling portrait of a mother whose care for her disabled child unfolds against a world of shifting mores.  This is a panoramic survey of the way social attitudes toward difference have shifted -- of what has been gained and of what has been lost.  It is above all a humbling portrait of time, a stern reminder that what we know to be true today may well be untrue tomorrow.  It is written with acuity, wisdom, and grace." Andrew Solomon, author of Far From the Tree

“The trick to reading the novel is to go with the flow as Drabble does, gliding into each event, laced with her dry, witty snaps of changing times of what was in the 1950s-'60s and what is now” Sydney Morning Herald

“Margaret Drabble's new novel radiates the kind of intelligent ability, breadth and wry insight that comes with a lifetime's practice of thinking and writing. Reading it as relaxingly satisfying as sinking into luxury upholstery” Book Oxygen

“A contemplative, moving and compelling portrait of a fiercely devoted mother and her symbolic "pure gold" daughter” The Leader

“Drabble's voice is both commanding and conversational” Sunday Herald

Praise for A DAY IN THE LIFE OF A SMILING WOMAN:

“Consistently skilful and engaging ... both personal and resonantly profound, so that the emotional impact of the whole book is much greater than the sum of its parts.” Guardian

“The stories offer a crash course in the acerbic delights of writer who, like a character in one of her stories, has spent “anxious and enjoyable hours trying todisentangle and isolate her various emotions, and to assess their respective values.” Telegraph

“Her short stories glimmer with the irony, lyricism, moral vision and amplitude we associate with Drabble’s novels.” The New York Times

"They are even better than one might have hoped." Telegraph

Praise for THE PATTERN IN THE CARPET:

“An unusual, engaging and yet tantalising memoir." The Times

“Refreshingly down-to-earth...A fascinating discussion about the moral and social status of jigsaws...In mounting a gentle but firm interrogation into such matters, The Pattern in the Carpet turns out to be full not so much of last things as late things – a mature overview of a lifetime spent fitting objects together in various ways before breaking them up and beginning all over again.” Kathryn Hughes, Guardian

"The pleasure of this book is in enjoying Drabble’s company. In her discreet and elegant way, she has assembled a puzzle from her own life and invited us to share some quiet moments on the solution" Sophie Ward, The Spectator