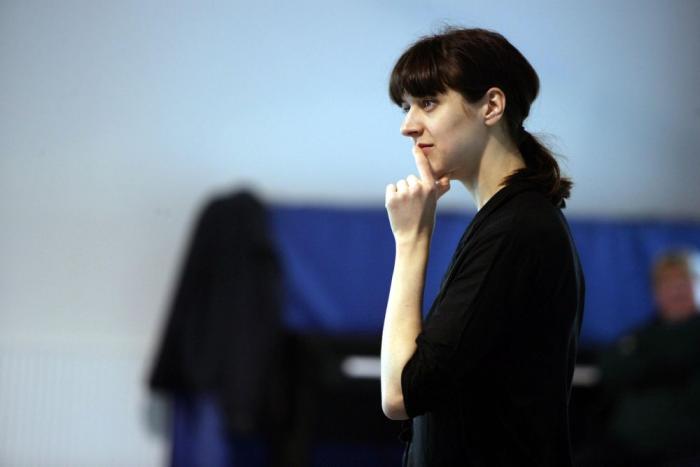 ★ ★ ★ ★ ★ “McIntyre directs with customary dexterity and alertness to the work” (Natasha Tripney, The Stage)

★ ★ ★ ★ ★ "McIntrye lends the play a stripped back clarity, while allowing space for gorgeous flourishes" (Connor Campbell, The Upcoming )

"McIntyre is a director of delicay and lightness of touch" (Natasha Tripney, The Stage ****)

THE COMEDY OF ERRORS

"Blanche McIntyre makes a formidable debut in this special space with a Comedy of Errors that is as enchanting as it is hilarious... It's no small praise to say that it is the most completely satisfying account of the piece since Tim Supple's acclaimed eerie/riotous RSC version nearly 20 years ago... McIntyre, in ways I am still trying to fully figure out pulls off a comparable feat in the great arena of the Globe... the Globe should have McIntyre back as soon as is humanly possible" (Paul Taylor, Independent *****)

"The physical side is delicious... at one point they quite literally bring the house down" (Ian Shuttleworth, Financial Times ****)

"You end up not only with a broad grin on your face but a tear in your eye" (Dominic Maxwell, Times ****)

THE SEAGULL
"Extraordinary ...Director Blanche McIntyre gets bolder and better with every production ...This is an extraordinary take on Chekhov’s play: layered, feisty, gorgeously melancholic and, lest I forget, frequently droll" (Matt Treuman, Telegraph *****)

"short, sharp reinvention blows away the cobwebs so thoroughly that Chekhov’s classic offers the shock of the new once again ...McIntyre’s astute staging leaves plenty to the imagination ...this mix of old and new is always absorbing, and sometimes revelatory" (Dominic Maxwell, Times ****)

"We're living in an era of strong and radical Chekhov productions … Blanche McIntyre's staging of The Seagull is up there with the best … Nothing is fidgety. Action and speech are muscular and concentrated … The next time the artistic directorship of a substantial theatre comes round, it should be hers for the taking" (Susannah Clapp, Observer)

"McIntyre’s production for once lives up to the cliché about making a classic seem new" (Ian Shuttleworth, Financial Times ****)

"an outstanding production by Blanche McIntyre ...it is fresh, funny, absolutely original and still properly attentive to the core themes of artistic aspiration, emotional cruelty and the changing theatre." (Michael Coveney, WhatsOnStage ****)

"Blanche McIntyre is a young director who has already earned considerable plaudits. Here, in a first British staging of this bittersweet Nineties play by Sebastian Barry, she shows why" (Henry Hitchings, Evening Standard)

"McIntyre – who this year won the Critics' Circle Most Promising Newcomer award – wisely allows the action to develop naturally... Not a noisy play, but one of extraordinary elegiac power" (Guardian ****)

"McIntyre – who won the Critics' Circle most promising newcomer – is an attentive, unpretentious director who here exceeds expectation. She brings out the play's humanity, singularity and charm" (Kate Kellaway, The Observer)

REPENTANCE / BEHIND THE LINES
"Superbly directed by Blanche McIntyre" (Telegraph)

"Staged, with enormous flair, by Blanche McIntyre... it is McIntyre's production that gives the play visual impetus" (Guardian)

"The atmosphere is intimate, and director Blanche McIntyre, a rising star, makes ingenious use of the constrained space" (Evening Standard)

"The double bill, intelligently blended by Blanche McIntyre's direction, has a polished rawness to it" (Official London Theatre)

"Exceptionally directed... a superlative achievement from all involved.  [The script is] evocatively realised by director Blanche McIntyre... Simply put, this show is little short of flawless... one can only hope that future directors have the same tact.  A truly terrific production, and an absolute must-see" (Whatsonstage *****)

"Director Blanche McIntyre follows last year’s dazzling Finborough revival of Accolade with another first-rate production.  She keeps the staging stark and simple, and makes chilling use of prolonged silences" (Guardian ****)

"Blanche McIntyre’s production is grippingly atmospheric, dark and tense and confident enough to revel in the sort of stillness and silence that ratchet up the tension" (Evening Standard ****)

"Blanche McIntyre's fabulous production... this is a bold and often brilliant stab at something new" (Times)

"Blanche McIntyre's riveting, stripped-down production... McIntyre has an impressive command of visuals as well as text and actors, harnessing the length of the stage to build a mood of paranoia with characters looming out of darkness" (Variety)

"A forgotten gem... Accolade is humorous, humane and subtle in its suspenseful twists, and McIntyre's up-close staging enthralls.  A talented young director and an exceptional fringe revival (Kate Bassett - Independent on Sunday)

"With Emlyn Williams' 1950 drama we are well into revelation... Blanche McIntyre's production matches the play in quality and approach... With a fraction of the budget and playing space, this is the production last year's National Theatre revival of Rattigan's After The Dance wanted to be - and perhaps the play it wanted to be as well" (Ian Shuttleworth - Financial Times *****).

"At an early date, Accolade already classifies as one of the definng rediscoveries of this theatrical year... Blanche McIntyre's career-making production... The praise afforded Accolade, one senses, has only just begun" (Matt Wolf - New York Times).

"Director Blanche McIntyre unearths a potent broadside directed at English prurience and hypocrisy... Witty and sad, tense but chary of melodrama, Accolade is an elegantly understated piece with a palpable fury in its depths... blessed with just about the finest cast I've ever seen in a fringe show" (Andrzej Lukowski - Time Out **** Show of the Week).