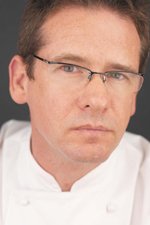 Aged twenty, Andrew was awarded the first Roux Scholarship, offering him the opportunity to train with legendary chef Michel Guerard at Les Prés d'Eugénie in Gascony. This profoundly influenced his culinary approach. After subsequent years in top Paris kitchens he returned with his family to the UK, eventually coming home to Perthshire in 2001 to open his eponymous restaurant at the Gleneagles Hotel and Resort.In January 2006 Restaurant Andrew Fairlie became one of only eleven restaurants in the UK to be awarded two Michelin stars, and was voted one of the world's top ten 'Greatest Hotel Restaurants' by US Hotel magazine. In the same year, Andrew was voted AA Chef's Chef of the Year.