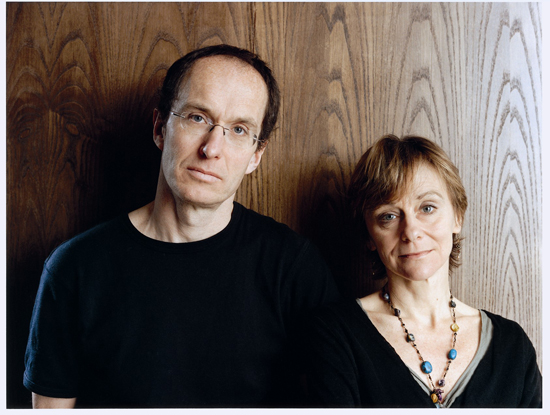 Nicci French is the husband and wife team of journalist Nicci Gerrard and writer Sean French. They write seamless novels while pursuing their own writing careers, and raising a family of four young children in Suffolk. Their novels include THE MEMORY GAME, THE SAFE HOUSE, KILLING ME SOFTLY, BENEATH THE SKIN and THE RED ROOM.

‘Nicci French's sophisticated, compassionate and gripping crime novels stand head and shoulders above the competition.  No one understands human psychological frailty better. No one writes better about grief, love, fear or emotional damage. Not many books are as insightful as they are addictive; Nicci French's are.’   SOPHIE HANNAH

For more information about Nicci French please visit their website at www.niccifrench.co.uk.

‘So,’ said Mora Piozzi, her lawyer, looking down at her laptop. ‘In brief: you are charged with the murder of Stuart Robert Rees, on December 21st, between the hours of ten-forty in the morning and half-past three o’clock in the afternoon.’

Tabitha is accused of murder. She is in prison awaiting trial.
There is a strong case against her, and she can’t remember what happened on December 21st.
She is alone, frightened and confused.
But somehow, from the confines of her cell, she needs to prove everyone wrong.

House of Correction is beautifully written, clever, shocking, twisty, so believable and utterly compelling. This is another stunningly brilliant novel to relish from Nicci French.

Praise for HOUSE OF CORRECTION:

‘The authors cleverly make you care about the difficult, depressive Tabitha… the murder trial that dominates the second half is a nail-biter.’
Jake Kerridge, Sunday Express

‘A real thriller, with a pulse-pounding conclusion, it will keep you gripped.’
Sunday Mirror

‘The husband-and-wife team are back with another fantastic crime thriller that’s also a courtroom drama… Tabitha is flawed, but funny, and you can’t help but cheer her on.’
Woman’s Weekly

‘The husband-and-wife team of Nicci Gerrard and Sean French… have taken the ingredients of the classic village mystery and transformed them into something up to date and gripping… Now that the criminal justice system is shamefully underfunded, this is a timely as well as an entertaining novel.’
Literary Review

‘Tabitha is in prison, charged with the murder of the teacher who once abused her. With no one convinced as she protests her innocence, she launches her own campaign to clear her name. Gritty and moving – the husband-and-wife team have scored another hit.’
Best

‘Tabitha is in prison, awaiting trial for the murder of a man found dead in her shed. The day is such a blur, though, she can’t clearly remember what happened. But she knows she’s no capable of murder. The only one she can trust is herself , so she must fight against all the odds… A twisty and shocking read.’
Bella

‘A novel that blissfully plays with two genres: on the one hand an against-the-odds legal thriller à la John Grisham where the defence lawyer is even more disadvantaged than usual; and on the other a Miss Marple whodunnit set in a Devon village, where the amateur sleuth is herself the prime suspect and has to conduct her investigation from jail. Enthrallingly, the reader knows where the plot is heading, but has no idea how the great escape can be pulled off.’
Sunday Times

‘Engrossing… In this clever courtroom drama, Tabitha is on trial for the murder of a neighbour. The evidence against her is strong and due to the medication she takes, she has virtually no memory of what happened, but she’s sure she’s innocent and has to build a case to clear her name.’
Good Housekeeping

‘I wanted everything to stop so I could read this book, there was something that grabbed me from the opening… This is a clever, well-crafted novel with twists and turns right until the end… The courtroom scenes are especially good and strike that balance between honour and order as well as farcical at times. Definitely a favourite read of mine for 2020.’
Woman’s Way (Ireland)

‘Describing it as a suspenseful prison thriller, or riveting courtroom drama doesn’t do this meticulously written detective novel justice. There is detail to sift through, CCTV footage to analyse, behaviour of the villagers to decipher. We become Tabitha’s shadow as the events surrounding that fateful day become clearer and more revealing. As well as its finely drawn characters and clever storyline, this is a novel that provokes you into pondering the workings of the wider justice system, police methods and prison life.’
Bookanista

Neve Connolly looks down at a murdered man.
She doesn't call the police.

‘You know, it’s funny,’ Detective Inspector Hitching said. ‘Whoever I see, they keep saying, talk to Neve Connolly, she’ll know. She’s the one people talk to, she’s the one people confide in.’
A trusted colleague and friend. A mother. A wife. Neve Connolly is all these things.
She has also made mistakes; some small, some unconsciously done, some large, some deliberate. She is only human, after all.
But now one mistake is spiralling out of control and Neve is bringing those around her into immense danger.
She can’t tell the truth. So how far is she prepared  to go to protect those she loves?
And who does she really know? And who can she trust?
A liar. A cheat. A threat. Neve Connolly is all these things.
Could she be a murderer?

Praise for THE LYING ROOM:

'A gripping suspense novel that crackles with tension'
RED

“Bestselling crime writing duo Nicci French is back with a compelling standalone novel. Busy mother Neve Connolly makes an intriguing and troubling decision not to phone the police after looking down at a dead body. From thereon in, the heart-pounding moments begin as the situation spirals out of control. Be prepared to put time aside for this twisty, psychological thriller. Once you’ve started, you won’t stop.”
Woman & Home

‘It’s a corker… as full of twists as you’d expect from these masters of the craft, this is as tense as they come’
Heat

‘The husband and wife team – Nicci Gerrard and Sean French – behind Nicci French have done it again with this excellent standalone psychological thriller… The book moves quickly, grabbing the reader from the first few pages and gripping firmly onto the imagination through a series of sharp twists and turns. However the real strength of this book is the depiction of a relatable central character caught in a particularly unfortunate situation. It is easy to sympathise with Neve – even if she does hide evidence and lies to the police. It begs the question: what would you do differently?’ Press Association
Press Association

‘This rare standalone thriller from the crime-writing duo is a stonker. Neve, a married mum-f-two, has been having a fling with her box. When he texts her to meet him at his flat, she is shocked to find him dead with a bloody hammer by his side. What she does next sets off a ripple effect of deception, and her lies are soon spiralling out of control. This tense, clever page-turner demands to be read in one sitting.’
Good Housekeeping

'A gripping thriller from one of our favourite crime writers'
Closer

'Bestselling crime writing duo are back with a standalone novel that's as compelling as it is tightly plotted... You'll find this twisty psychological thriller hard to put down'
Woman's Weekly

‘French, the pseudonymous couple who single-handedly revamped the psychological thriller in the 1990s, how they remain as expert at suspense, plot and the psychology of stressed heroines’
Sunday Times

‘Nicci French more or less invented the currently fashionable “domestic suspense” novel… they’re bang back on form with this new standalone… Few of the writers who have followed their lead can match this pair of old masters for the cunning of their plotting.’
Sunday Express

'The husband-and-wife team - Nicci Gerrard and Sean French - have done it again with this excellent standalone psychological thriller... The book moves quickly, grabbing the reader from the first few pages. However its real strength is the central character... Fans of Nicci French are sure to love this installment and those who are new to the author should expect to be turning pages late into the night.'
Daily Record

‘This crafty standalone novel by two powerhouses of the genre begins with Neve Connolly finding the dead body of a man she knows. She can’t tell anyone. What would you do?... I didn’t want to put this down, I was so engrossed. Thrilling and unnerving in equal measure.’
Woman's Way

“A rare standalone novel from best-selling writing partnership, Nicci French. To escape the pressures of family life, Neve starts sleeping with her married boss but when she discovered his murdered body, she’ll do anything to hide evidence of their affair. Neve’s lies soon spiral out of control, but is the affair the only thing she’s trying to cover up? A gripping suspense novel, which crackles with tension – you’ll be hooked.”
RED

'An author, or rather two authors, abandoning an established series for a stand-alone novel which has been the buzz of London publishers (and their accountants) is Nicci French, the married writing partnership of Nicci Gerrard and Sean French. They Lying Room, just out from Simon & Schuster is billed, as are so many thrillers which might be loosely termed domestic noir these days, with the epithet ‘how far is she [the central character] prepared to go to protect those she loves?’ Well, if The Lying Room is domestic noir, as it’s written by Nicci French, it will be a superior example.'
Mike Ripley

'Gripping and all too real, this is a crime story with a terrific punch'
The Daily Mail

Praise for the Frieda Klein series:

"Frieda has all the hallmarks of a classic Nicci French character, but when one of her patients reveals fantasies that tie in with a child abduction case that is dominating the headlines, she ends up coming to the police's aid rather than vice versa. The plot is drum-tight, the premise is chilling and the twist is infuriatingly good. Its only flaw is the wait for the follow up. " The Independent Summer Holiday Pick

“Tale full of dark psychology and tension…there’s no denying how commanding this first entry is.” Barry Forshaw, Express

"[Nicci and Sean French]are old hands at creating troubled, vivid, complex female leads, and Klein is no exception...Nicci French is undeniably at the top of British psychological suspense writing, expert in the unguessable twist, supremely skilled at ratcheting up the tension." The Observer

"With it's brooding atmosphere, sustained suspense, last-minute plot twist, and memorable cast of characters, this series debut will leave readers eager to discover what colour Tuesday will be." Publisher's Weekly

“This book is extraordinary - it has the best cliff-hanger ending ever ever ever” Alex Heminsley, 6music

“This is a tense thriller with a troubled female psychotherapist at the helm...both a frightening and gripping read.” Easy Living

“Gripping thriller – this heart-stoppingly good tale sets the bar high for the next seven books – we can’t wait to read them!” Good Housekeeping

"Their portrayal of the city, in all its glorious greyness, is magnificent." Evening Standard

"The splendid Frieda Klein…the suspects and low-life characters are all beautifully done, and there’s a strong supporting cast…I was an avid reader of the Nicci French thrillers and this new venture has me hooked already” Readers Digest

“Launches ambitious new thriller series with this terrific novel…the writing is pacy, the jaw-dropping twists are plentiful and London’s grimy underbelly is examined with dextrous skill. Definitely worth investigating.” Shortlist

“A brilliantly enigmatic heroine…this is one of French’s hardest to put down novels with a plot that flouts genre convention  to explore a compelling psychological phenomenon…this sophisticated thriller proves that series or stand alone, French leads the field.” Sunday Express