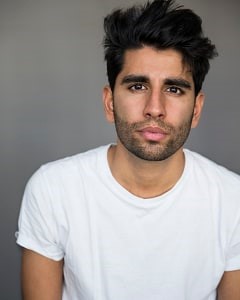 From survival on a pacific island in E4's 2019 re-vamp of Shipwrecked, to leading feature film Boogie Man, to recording with the writers of the first ever Spice girls album Kush Khanna has brought his energy and zest for life out in every project he has worked on. An enigmatic and rising star that instantly catches your eye when on screen with his natural ability to make anyone he’s around very comfortable. Kush is also Simon Fullers former prodigy and worked with the likes of Andy Morahan and Amy Jackson.

Born in Aylesbury, Kush was scouted by industry professionals from an early age. Performing on stage since age four, he went on to star in the feature PATIALA HOUSE, from there he signed with the infamous Simon Fuller and XIX.  Kush’s career has gone from strength to strength, seeing him originate a role in Everybody's Talking About Jamie at the Crucible and starring in international Indie film BOOGIE MAN; for which he won Best Actor at a several film festivals. Most recently voiced characters in the new Ubisoft’s Watch Dogs: Legion 2.