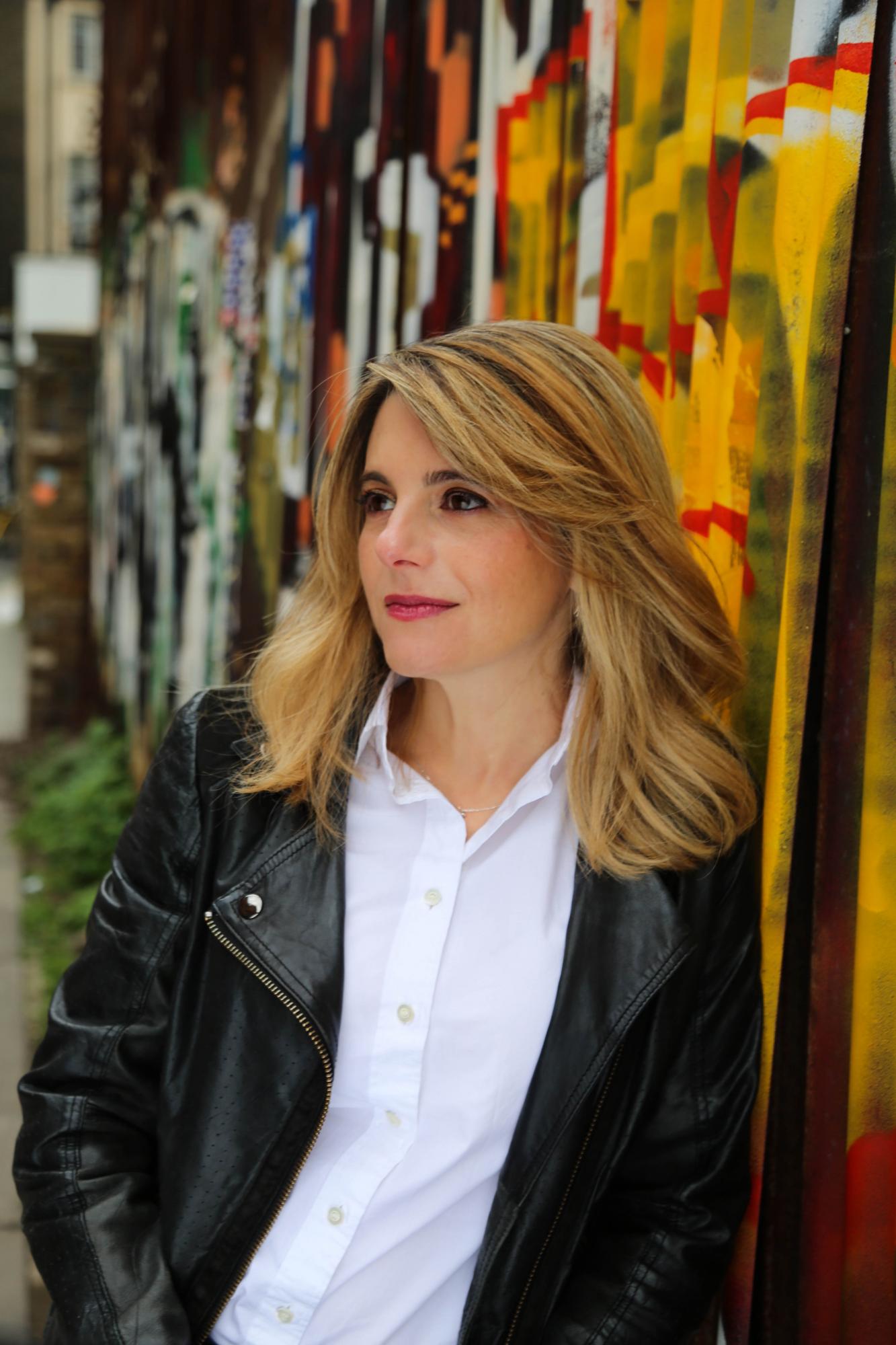 Hallie received her B.A. in History from the University of Massachusetts, Amherst and an M.A. in British History and History of Art from the University of Leeds. Remaining at Leeds, she embarked on her studies for a PhD and later completed her thesis on the subject of marriage and child-rearing in the eighteenth century.

In 2005, she published The Covent Garden Ladies, which brought to public attention the true story of the Harris’s List of Covent Garden Ladies. Since its publication, her history of this notorious guidebook to Georgian London’s prostitutes, along with her edited compendium of The Harris List of Covent Garden Ladies has succeeded in capturing the imagination of millions. Hallie’s work has been the subject of several art exhibitions, two television programmes, a student film and even lines of jewellery, notepads and fridge magnets (much to her amusement). In 2006, BBC4 broadcast The Harlots Handbook, a documentary based on Hallie’s book which she presented.

Her equally celebrated second book, Lady Worsley’s Whim (entitled The Lady in Red in the US) about the 18th century’s most infamous adultery trial became BBC Radio 4’s Book of the Week in November 2008. In August 2015, it appeared as a 90 minute drama for BBC2 entitled The Scandalous Lady W, starring Natalie Dormer and Shaun Evans.

Hallie is also the author of a series of novels set during the period of the French Revolution. The first of these, Mistress of My Fate was published in 2011 (2013 in the US). The second, The French Lesson will be published in the UK on the 21st of April, 2016. She is currently at work on a third,The Adventuress.

In addition to writing books, articles and reviews, Hallie regularly appears on TV as an expert contributor to documentaries. She also acts as ahistorical consultant for period dramas, most notably the award winning Channel 4 series, City of Vice, and the upcoming BBC1 series, Jonathan Strange and Mr Norrell. She is currently developing a drama series with Wall to Wall Television about indentured servants in pre-revolutionary America.

Hallie has a passion for telling a great historical tale and has a nose for unearthing previously unknown stories from little-known sources. She loves challenging our preconceived notions about our ancestors’ lives and revels in history’s surprising, unpleasant and gritty truths. Her extensive academic experience extends to research, teaching, lecturing and curatorial work. In the past she has been employed as a curator for the National Portrait Gallery, a university lecturer and a commercial art dealer. In 2014 she curated an exhibition on women’s reputations in the Georgian era for No.1 Royal Crescent in Bath and has been involved with several projects at the Foundling Museum in London.

She lives with her husband in London.

THE FIVE: The Untold Lives of the Women Killed by Jack the Ripper - Transworld - Feb 2019

Shortlisted for the 2019 Baillie Gifford Prize for Non-Fiction

Five devastating human stories and a dark and moving portrait of Victorian London - the untold lives of the women killed by Jack the Ripper.

Polly, Annie, Elizabeth, Catherine and Mary-Jane are famous for the same thing, though they never met. They came from Fleet Street, Knightsbridge, Wolverhampton, Sweden and Wales. They wrote ballads, ran coffee houses, lived on country estates, they breathed ink-dust from printing presses and escaped people-traffickers.
What they had in common was the year of their murders: 1888. The person responsible was never identified, but the character created by the press to fill that gap has become far more famous than any of these five women.
For more than a century, newspapers have been keen to tell us that ‘the Ripper’ preyed on prostitutes. Not only is this untrue, as historian Hallie Rubenhold has discovered, it has prevented the real stories of these fascinating women from being told. Now, in this devastating narrative of five lives, Rubenhold finally sets the record straight, revealing a world not just of Dickens and Queen Victoria, but of poverty, homelessness and rampant misogyny. They died because they were in the wrong place at the wrong time – but their greatest misfortune was to be born a woman.

Praise for THE FIVE:

Mail on Sunday : “FIVE STARS: At last, the Ripper’s victims get a voice… An eloquent, stirring challenge to reject the prevailing Ripper myth.” (Gwen Smith )

The Guardian: “Forests have been felled in the interests of unmasking the murderer, but until now no one has bothered to discover the identity of his victims. The Five is thus an angry and important work of historical detection, calling time on the misogyny that has fed the Ripper myth. . . This is a powerful and a shaming book, but most shameful of all is that it took 130 years to write.” (Frances Wilson)

Daily Mail : “By collating these five deeply affecting biographies … Rubenhold has given these women the immortality that their murderer does not deserve.”

Sunday Times : ‘‘Mary Ann Nichols, Annie Chapman, Elizabeth Stride, Catherine Eddowes, and Mary Jane Kelly deserve to be thought of as more than eviscerated bodies on an East London street. This haunting book does something to redress that balance.” (Daisy Goodwin)

The Spectator: “… a magnificently vivid book that shows how — despite the degradations inflicted by violent men, inept police and a bloodthirsty public — dead women can be given back their voices. ”

The Washington Post : “Rubenhold aims to restore them to history as full human beings…Her riveting work, both compassionate group portait and stinging social history, finally gives them their due”.

“How fitting that in the year when we celebrate the 100th anniversary of women’s suffrage, dignity is finally returned to these unfortunate women.” (Professor Dame Sue Black, author of ALL THAT REMAINS)

“A Ripper narrative that gives voice to the women he silenced; I’ve been waiting for this book for years. Beautifully written and with the grip of a thriller, it will open your eyes and break your heart.” (Erin Kelly, author of HE SAID/SHE SAID)

“What a brilliant and necessary book” (Jo Baker, author of LONGBOURN)

“Devastatingly good. The Five will leave you in tears of pity and of rage.” (LUCY WORSLEY)

“Stupendous. The sort of work that keeps history vital.” (IMOGEN HERMES GOWAR, author of THE MERMAID AND MRS HANCOCK)

“Fascinating, compelling, moving, The Five makes a fierce, passionate argument about the ethics of how we engage with murder. A brilliant,properly thoughtful, responsible piece of political writing.” (BRIDGET COLLINS, author of THE BINDING)

1789: Henrietta Lightfoot, a young Englishwoman, trips on her silk gown as she runs for her life along the bloodstained streets of revolutionary Paris. She finds refuge in the opulent home of Grace Dalyrmple Elliott, the city’s most celebrated courtesan. But heads are rolling, neighbours fear neighbours, and masters whisper before servants. As the sound of the guillotine echoes outside, within the gilded salons of high society Henrietta becomes a pawn in a vicious game of female power. How will she survive in a world where no one can be trusted?

Finely plotted and stylishly told, this story of a lone woman making her way through the bloodiest times in history resonates with a sense of modern revolution and tyranny. THE FRENCH LESSON shows with panache how the tides of history and human nature never change.

Praise for THE FRENCH LESSON:

"Compelling and operatic...Reads like a modern thriller" Simon Sebag Montefiore, author of The Romanovs

"Rubenhold unfolds a complicated plot with great dexterity, brilliantly evoking a society in which the traditional bonds are being violently sundered." Sunday Times

"A gleefully modern telling of a juicy chapter of history." The Times