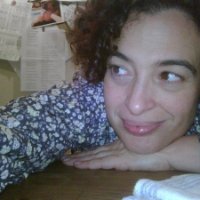 Dana is currently writing one episode of the third season of VIKINGS: VALHALLA for MGM Television/Netflix after having written one episode for eleventh season of DEATH IN PARADISE for Red Planet Pictures. Dana and Hamish Wright's original pilot BOOMERANG is under option with Red Productions, she is writing a treatment for a medical drama titled VITAL SIGNS for Red Planet and a treatment for Palomar Pictures.

Since graduating from the BBC Writers Academy in 2004, Dana has written extensively for all four of the BBC Continuing Dramas and has written more than 40 episodes of both  HOLBY CITY and CASUALTY as well as multiple episodes of EASTENDERS. Alongside that, Dana has written two episodes for the new Netflix historical drama docuseries THE LAST CZARS, produced by Nutopia. She won the Writers Guild Award, the MIND Mental Health in the Media Award and was shortlisted for The Broadcast Award for her Special mental Health Episode of CASUALTY – ‘Place of Safety'.

She has written four episodes of DEATH IN PARADISE for Red Planet/BBC1, one of which starred Tara Fitzgerald. Her other work includes AFTERBIRTH (Feature length BBC commission), SWINGS AND ROUNDABOUTS (BBC Radio 4), CLEAR AIR TURBULENCE (BBC Radio 4) and she has developed original material with Noho, Red Planet Pictures and ITV Studios among others.

Previously, Dana worked extensively as a theatre director – most notably as Associate Director of Contact Theatre, Manchester, for which she wrote and directed the award-winning YOU HANG UP FIRST (Manchester Evening News Award for Best New Play). Other work includes a Writers Attachment at the National Theatre Studio, and as Director: THE DEEP BLUE SEA (Nottingham Playhouse), THE JAIL DIARY OF ALBIE SACHS (Salisbury Playhouse), MY CHILDREN, MY AFRICA (Salisbury Playhouse), ONE DAY IN OCTOBER (Riverside Studios) and THE VOODOO PHENOMENON OF ZOMBIE for Universal Grinding Wheel (Pleasance Edinburgh). She has a large body of work on the London Fringe as well as being staff director at the Royal National Theatre.

She lives in Gloucestershire with her husband, two boys and their dog. Her greatest achievement to date remains hosting Top of the Pops on Israeli National Television.