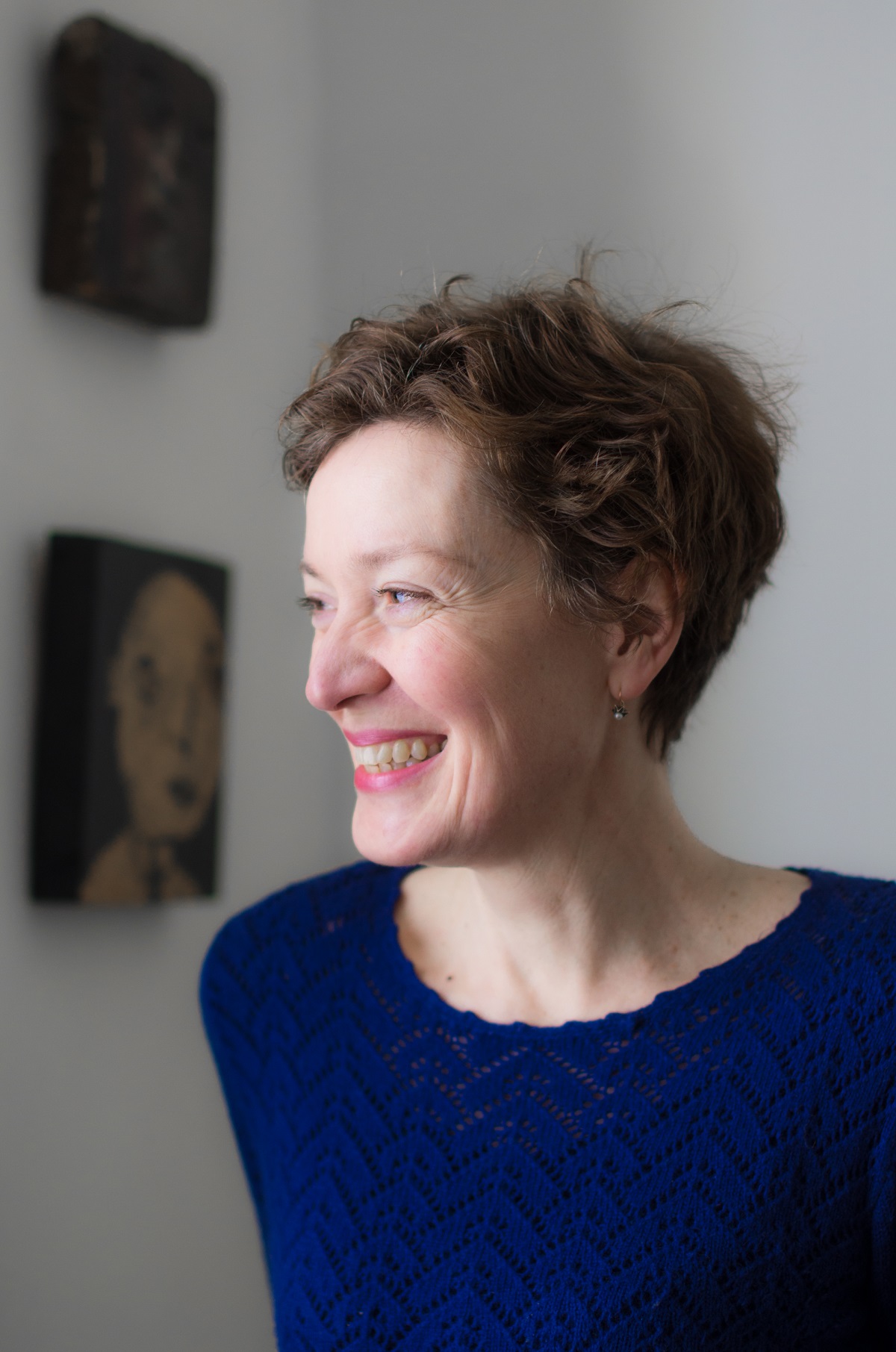 Carys Davies‘s debut novel, West, was shortlisted for the Rathbones Folio Prize, Runner Up for the Society of Authors’ McKitterick Prize, and winner of the Wales Book of the Year for Fiction. She is also the author of two collections of short stories, Some New Ambush and The Redemption of Galen Pike, which won the Frank O’Connor International Short Story Award and the Jerwood Fiction Uncovered Prize. She lives in Edinburgh.

Her new novel, THE MISSION HOUSE, was published in August 2020 by Granta.

‘Enthralling… Carys Davies has followed her highly praised debut, West, with another jewel of a novel… The evocation of a 1950s British idyll in India is so persuasive that it comes as a shock to read the word “email” – this, it transpires, is a novel set in the present day… Fascinating’ Observer

‘[A] brilliantly crafted second novel… Having subtly prepared the ground, Davies finally springs the jaws of her plot, revealing, heartbreakingly, to us, and the tragically blinkered Hilary, what kind of story this really is.’ Daily Mail

‘[A] delicately political tale that keeps the real drama largely below the surface, leading the reader to gauge the extent of the protagonist’s self-deluding solipsism.’ Metro ****

‘Davies’s use of [language] reveals an ear finely tuned to subcontinental peculiarities… The Mission House is an interesting take on a familiar trope: the westerner who finds in India deliverance from the wasteland of modernity… Byrd is like so many others, from beatniks to empire loyalists, who form a connection not with real Indians but with a fantasy of India fashioned out of their own ideological prejudices and psychological needs. The Missing House truthfully reveals that the new realities of India will increasingly have their revenge on these tired old romances.’ Guardian

‘Davies’s previous novella, West, is an exquisite, haunting tale of an unlikely hero in 19th-century America. Here again she summons up a man whose obvious failings and weaknesses live side by side with a heartbreaking kind of nobility. No words are wasted, yet her conjuring of place and character are rich and vivid. Davies’s tale feels timeless – so much so that it’s a shock when Byrd sends an email – a message of moral responsibility framed as quiet tragedy.’ The Times

‘Davies weaves her story with brevity and to devastating effect, drawing a portrait of an odd group of lonely people struggling to find a connection in a changing world.’ Radio Times

'[A] stunning debut novel [...] not a word is wasted; the canvas is as wide as her brush is fine. [...] [Davies] holds comedy and tragedy in equal, delicate balance. And she balances each individual consciousness against "the dizzying weight of all the mystery of the earth and everything in it and beyond it" - that unknown which so tempts Bellman. There are many worlds to explore within this deceptively short book, which gallops towards its conclusion with a mythic inevitability. You won't be able to turn back.' Justine Jordan, Guardian

'[West] is one of the most haunting and beautifully crafted novels I have read in a long time. [...] Davies, as she showed in her previous books, is immensely generous towards her characters - a gift of empathy that is hard to resist. She is comfortable, too, inhabiting different voices, and is subtle and rounded in her characterisation. [...] Relationships, too, are gracefully developed. [...] Then there is the subtlety and control of the writing, the economy, and the rhythm of the language - and the sense that Davies has taken immense time and pains with her prose. Everything is measured, and even the most sinister of moments are touched with a strange sort of grace [...] There is something of the fairy tale about Davies's book. And like the best fairy tales, it is filled with wonder, about the natural world, and about humans and their impractical dreams. Davies has produced something quite wonderful in West. This is a gently seductive book, one that entrances right to its cleverly conceived end.' Andrew Holgate, Sunday Times

'This novel captured my attention in a way no other story has for years. A slim volume, just 146 pages, with only half a dozen characters, West achieves the epic grandeur of its subject. [...] Davies has taken some of the familiar props of the Western saga and used them in unexpected ways to create a short bright fable of obsession and endeavour. Her narrative has the sharp, swift action of myth and legend, or even Grimm's Fairy Tales, but she also takes us deep into the mind of each character. [...] West is a brief story with not a word wasted. Each chapter brings a new scene into sharp focus or re-examines an earlier scene from a different viewpoint. Either way, the effect is like being drawn into an intricately detailed Breughel painting.' Stuff NZ

'[S]o crisply and concisely written, and so warm and human in its economy, that it shames the behemoths sitting beside it on the nation's bookshop shelves. It's a book you can read in a day and that will resonate all year long in your head.' Andrew Holgate, The Times

‘Slender, stark and utterly mesmerising […] the language, lyrical yet pared down, conveys complicated feelings of grief, guilt, sadness and a strange kind of wonder’ Mail on Sunday

'Much hype and praise for Carys Davies’s debut novel, West, the strange story of a man who leaves his family and heads off into the old American interior in search of monsters. Is it deserved? Well, yes. I gobbled up the slim book in a few hours, then went straight back to the beginning and started it again. It’s a haunting, beautifully weighted tale, so skilfully and sparely told [...] If you’re looking for something to read this week, this is it.' London Evening Standard

'Set in 1815 in Frontier America, this economical first novel by acclaimed short story writer Davies can be read in a sitting, but has the scope and resonance of an epic. Not a word is wasted [...] The result is a page-turner that can stop you in your tracks to linger over a sentence. (A lesser novel might, in fact, be capsized by their impact.) It’s a bravura performance — seasons come and go in a handful of words and there are masterful shifts of perspective and tense — but Davies’s artistry is matched by her storytelling powers, and her denouement is cheer-raisingly satisfying.' Daily Mail

'West has the wisdom and lyrical prose of a folk tale whose power grips the reader from the beginning and demands a single-session read. A short novel, deceptively simple, it tells two tales of life at home and away whose symmetrical dangers are presented in stark terms. [...] [It] is in the American realist tradition, mixing fable and social reality to stunning effect. Although his novels are set a century later, Steinbeck is an obvious comparison, both the journey west in The Grapes of Wrath and the coming-of-age narrative of The Red Pony that sees a young protagonist awaken to the dangers of life and the infallibility of adults. [...] The way Davies brings her two tales together is both innovative and inevitable, with a fairytale twist that is more Grimm than Disney. Although set centuries ago, her morally complex novel has an immediacy that lands us in frontier America, a brave new world with ever present danger.' Irish Times

'There is something of Don Quixote about Bellman [...] West has been described as myth-like, and there's certainly a sense in which it operates as a framework for considering age-old themes, yet its characters never feel less than fully human, the world they inhabit never less than fully imagined, and for its final third it's a real page-turner, too. A magnificent achievement.' Scotsman

'[A] beautifully sad novella [...] Davies's lapidary prose is a marvel - she creates worlds in a few deft pen strokes. And despite the futility of Bellman's "demented quest", she makes you feel his "mad hope and... deranged curiosity" as something deeply noble.' The Times

'[This] brilliant gem of a novel glints with sadness and a sombre kind of wonder.' Sunday Express

'A short powerhouse tale of a father and daughter at a US frontier. Worth seeking out.' Emerald Street

'Menace and mordant wit are the blood that runs through these veins, but there's a pulse of wonder in Carys Davies' West. She sees the world and its inhabitants both as we hope they are and as we fear that they might be. An audacious and enigmatic debut of thrilling dimensions, and a reminder of fiction's possibilities.' Akhil Sharma

'A story of determination, betrayal, folly, and reckless hope written in the grand tradition of the pioneers. You enter the familiar American frontier and shortly are convinced, with Davies' hero, that the mammoths of the Pleistocene still shyly roam the Plains. The seams between imagination and history in this extraordinary story are invisible. I believed every word.' Salvatore Scibona

'West is a journey and a wonder. A man leaves what he loves and goes west in search of the amazing. A story concerned with value and language, love and absence, life and death. A debut of real distinction.' Bernard MacLaverty

'To read Carys Davies' West is to encounter a myth, or a potent dream - a narrative at once new and timeless. Exquisite, continent, utterly vivid, this short novel will live on in your imagination long after you read the last page.' Claire Messud

'West proves what in-the-know lovers of her short stories have already been trumpeting: Carys Davies is a deft, audacious visionary, a master of the form. In West, she breaks open our fascination with fated journeys and the irrepressible draw of the unknown, imbuing the American landscape with her own rare magic, twisting the heart as few others can, brilliantly navigating the tension between narrative minimalism and imaginative opulence.' Téa Obreht

'West has all the stark power and immediacy of a folk-tale or a legend. It is also structured with great artistry, a beguiling sense of form and pace, and a depth in the way the characters are created, making clear that Carys Davies is a writer of immense talent.' Colm Tóibín

'Davies' slim, complex, and achingly beautiful first novel is a sculpture of daring shifts and provocative symmetries welded together by lyrical, fast-paced prose... The result is a choral performance, reminiscent of those by Penelope Fitzgerald... Deployed on the stage of the midlapsarian American frontier, Davies' chorus manages to weave threads of myth and hope into the gnarly chords of historical tragedy. A masterful first novel - the sort of book that warms even as it devastates, that forces serious reflection and yet charms.' Kirkus, starred review

'A tightly-knit, compulsively readable tale... Davies' slender novel has all the heft of a sprawling western classic.' Booklist, starred review