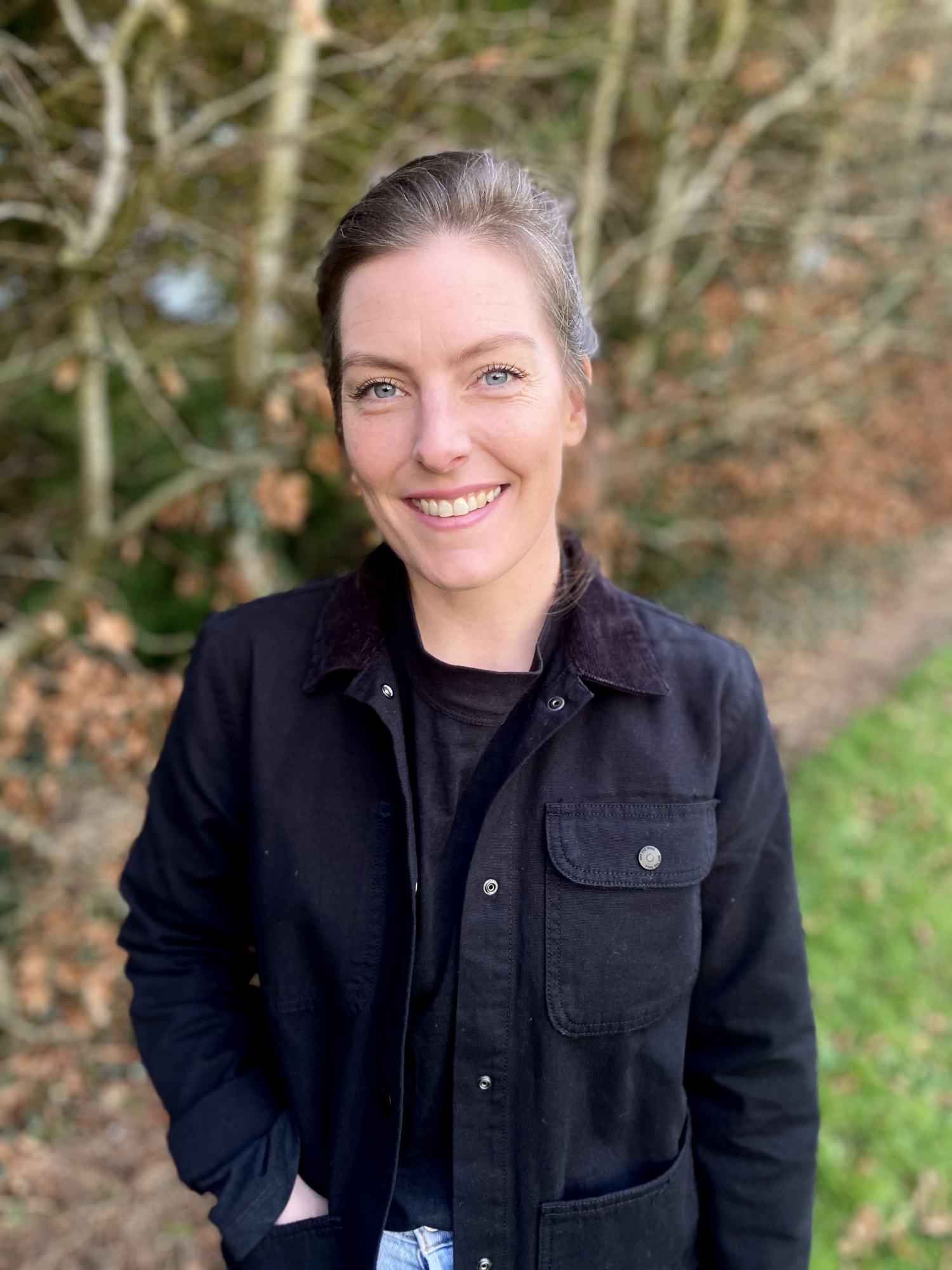 Caoilinn Hughes is an Irish writer whose first novel Orchid & the Wasp (Oneworld 2018) won the Collyer Bristow Prize 2019, and was shortlisted for the Hearst Big Book Awards, the Butler Literary Award and was longlisted for the Authors' Club Best First Novel Award and the International DUBLIN Literary Award 2020. Her poetry collection, Gathering Evidence (Carcanet 2014), won the Irish Times Strong/Shine Award. Her short fiction won The Moth Short Story Prize 2018, an O.Henry Prize in 2019 and the Irish Book Awards' Story of the Year 2020. Her second novel, The Wild Laughter (2020) was shortlisted for the An Post Irish Book Awards' Novel of the Year, the RTÉ Radio 1 Listener's Choice Award 2020, longlisted for the Dylan Thomas Prize 2021, and won the RSL's Encore Award 2021. She is the 2021 Writer Fellow at Trinity College Dublin.

'[The Wild Laughter is] a grand feat of comic ingenuity, mischievous and insightful, and full of resonance for the way we live now. The voice of Caoilinn's doomed narrator, Doharty 'Hart' Black, is so original and vibrant, with a very particular poetic vernacular. This is a story of modern Ireland, set in the crash post Celtic Tiger, but it also feels timeless in many ways, with Biblical myth simmering under the surface. The Wild Laughter is a real page-turner, in spite of its literary heart, and a joy to read. We all look forward to reading more from Caoilinn Hughes in the years to come.' RSL Encore Award 2021 Judges

‘I loved this book. So funny and bleak. I loved the madness, the tone, the ending, the realisation, The Third Policeman charge of the whole thing.’ Roddy Doyle

'The Wild Laughter is painfully smart, comically brilliant and boldly subversive. Hughes makes her subject matter entirely her own while providing a lacerating look at the world we live in.' Olivia Sudjic

'What a profound, much needed, urgent novel. It’s dark and beautiful and touches the heart of what deep suffering our political systems have brought upon the world, but seen in that clearest way - intimately, microscopically, through family. The myriad ways they can love, hurt and betray one another.’ Fatima Bhutto

'The people around me must be just about sick of hearing me rave about this book. I believe Caoilinn Hughes is in the early stages of a career that will see her lauded more and more in decades to come. Reading this book in 2018 was like a slap in the face, reminding me that the rules of fiction can always be rewritten. I don’t know if it made me want to write fiction or give up before I ever started, because she’s just that good. Also the protagonist confronted me with some personality traits I’m not stoked I frequently display.' Bri Lee, Sydney Morning Herald

'A remarkable, propulsive debut novel [...] No precis can adequately convey the novel’s startling, impressionistic prose, nor its corrosive humour. Jewels of observation glitter amid the earthy gags. [...] Exuberant [...] it zings with energy, ambition and daring.' TLS

'[A] funny, punny flash of genius with a sting in the tale... For such a tiny island, flung westerly on the last European outpost and holding barely a handful of souls, [Ireland has] produced far more than our expected quota of fine writers and we continue to do so. Then along comes Caoilinn Hughes and the bar doesn't get raised, it gets broken - smashed and smithereened - and all the king's horses and all the king's men... Not since Paul Murray's Skippy Dies have I read such an original Irish novel, beginning as it does in middle-class county Dublin and never missing a beat. [...] And so this wondrous odyssey goes, from Dublin to London to New York, with Hughes taking vicious, gleeful swipes at every falsity, every delusion, every instance of breathless wonder at the Emperor's New Clothes than you could ever dream up. Once or twice the reader's imagination is stretched by the plot, but then again this is fiction. Dazzling, heady fiction. Hughes is an award-winning poet and it's barely concealable. She simply dances on the page, her imagination is riotous, her flawed characters have shape and colour and sometimes heartbreaking humanity. When I finished this book I wanted to return to the start. Immediately. Just to savour it all again.' Irish Independent

'This year's Conversation with Friends [...] [Orchid & the Wasp] has caused a stir on both sides of the Atlantic. It has landed on these shores with impressive literary wings and endorsements from, among others, Pulitzer-winning Anthony Doerr, who called Hughes "a massive talent". He's not wrong. Orchid & the Wasp is an ambitious debut. [...] When sex does appear in the novel, particularly the exploration of sexuality with her university housemate and love interest, Harper, the encounters and the prose fizz. It's not often you read an author who is so good at writing about sex and sexuality you wish the novel had a lot more. [...] Hughes has created something special in Gael, who is her own woman in a way we don't often see in books: brave, complex, fractured, intelligent, resourceful, ruthless and unforgiving (I could go on) while prepared to do anything, at any cost, to help the ones she loves. [...] [Orchid & the Wasp] is ambitious, full-bodied and fresh.' Paul McVeigh, Irish Times

'Caoilinn Hughes’s highly ambitious fiction debut contains multitudes. […] Kick-ass, whip-smart and with “a tongue like a catapult”, Gael belongs to a venerable tradition of feisty heroines. […] Some serious intellectual themes are explored: the crisis of late capitalism; the redemptive power of art and love; free expression in sexual matters; and much else besides. But maybe most strikingly, Gael Foess makes a telling contribution to the unlikeable female narrator debate […] readers are going to love her.' The Sunday Times

'A winning debut novel [...] [it moves] swiftly, coolly, and flowingly; [it pursues] effortlessness. [...] Its protagonist, Gael Foess, is a ruthless, fast-thinking beauty who might have read as aspirational in a James Bond story but does not, here. [...] Gael can be more cuddly than she seems—her devotion to Guthrie manifests in a plot to steal, forge, and sell copies of his paintings to the Manhattan artistic élite—and Hughes, a poet, touches the prose with a comic wand. [...] [Gael's] exertions, in which the dopamine thrill of risk meets the gritted effort of survival [...] offering the bodily remove of an episode of “American Ninja Warrior.”' New Yorker

'Orchid & the Wasp opens outrageously and does not miss a beat from there [...] Caoilinn Hughes’ sharp and, at times, hilarious observations call to mind the unblinking writing and dysfunctional families not only of Jane Austen, but also Christina Stead and Jonathan Franzen. The full cast of characters is memorable and original, but Gael in particular challenges and charms. Orchid & the Wasp is a deceptively entertaining novel about merit and ambition, society and responsibility, and self-determination and fate, in which Hughes upends expectations and asks big questions, especially about obligation and love, without breaking stride, even for a moment.' Readings

'Luminous… sparkles with acuity and concision…. [Gael] is an indomitable, highly adaptable character who can navigate through tumultuous times and wildly disparate environments with ingenuity and grit.' Los Angeles Review of Books

'[In ORCHID & THE WASP] Hughes delivers a compelling exploration of what it means to create art, skewering the arbitrary restrictions of art-world gatekeepers along the way. At the emotional heart of this book lies a darker question, though: What does it mean to make a performance of your own life, in service of your family, when the cost might be to lose them forever? As strange, musical, and carefully calculated as its unusual heroine.' Kirkus

'[A] visceral and electrifying debut […] in Gael, Hughes has created a mesmerizing and compelling force.' Booklist

​‘Orchid & the Wasp is a gorgeous novel told in an onrush of wit and ferocity. Art-forging, smack-talking, long-distance-running Gael Foess, three times smarter than everyone around her, proves to be an unforgettable heroine, and her journey will rattle your most basic assumptions about money, ambition, and the nature of love. Caoilinn Hughes is a massive talent.’ Anthony Doerr, Pulitzer Prize-winning author of All the Light We Cannot See

‘Orchid & the Wasp is an ambitious, richly inventive and highly entertaining account of the way we live now. Caoilinn Hughes writes with authority and insight, and her novel is as up-to-date as tomorrow's financial-page headlines.’​ John Banville​, Booker Prize-winning author of The Sea

‘Caoilinn Hughes is the real thing — an urgent, funny, painstaking and heartfelt writer. Orchid & the Wasp is a startling debut full of the moral complexity, grief and strange bewilderments of humanity. As the world spins ever more quickly in response to the demands of grifters, parasites and liars, this book offers a troubling, beautiful and wise response.’ A.L. Kennedy, Costa Prize-winning author of Day

‘Gael, the young heroine of Orchid​ ​& the Wasp, is a magnificent and assured creation, breathtakingly smart, never self-pitying, impossible for others to manage, my favorite discovery this year. ​Hughes's characters​ are rare, like no one you've read before. This is an entirely original novel, dazzling and beautiful, disturbingly cold and insistent.’ David Vann​, bestselling author of Legend of a Suicide and Bright Air Black

'Fresh, playful and exuberant: Hughes has arrived with a heady style that is full of surprise and invention.' Paul Lynch, Prix Libr’à Nous-winning author of The Black Snow

‘Caoilinn Hughes has given us an unforgettable character in Gael – an unflinchingly wise and wise-cracking guide through our fractured times. Hers is a story that holds the fun-house mirror to the society we have built of greed and twisted finance. From the doomed Irish boom to the Occupy movement, the novel lays bare the impoverished spirit that led to economic collapse while providing us a path out of it. By turns poetic, hilarious and raw, this novel gives us hope that love and the retrieval of spirit are not only achievable, but worth pursuing to the very last sentence.’ Ana Menéndez, Pushcart Prize-winning author of In Cuba I Was a German Shepherd

'A razor sharp wit and an astonishing psychological and emotional perceptiveness combine to yield uncommonly rich portraiture in this bracing book by a deadly talented writer, in prose so refined one slows to savor each beautifully unfolding sentence. Unsentimental, yet sneakily moving and given to surprising bouts of joy, Orchid & the Wasp becomes a referendum on the resiliency of selflessness in a contemporary world steeped in the logic of ambitious self-advancement.' Matthew Thomas, New York Times-bestselling author of We Are Not Ourselves

‘In lush, envy-inducing prose we’re introduced to Gael Foess, the spikiest adult-in-training since Lolita, who has parents worthy of a Roald Dahl novel, in their poor caretaking efforts and self-absorption. We can only hang on in wonder as we witness the savvy Gael’s progression through life from such beginnings. Caoilinn Hughes’s crafted, intricate language is a joy and her characters strut their many flaws with panache. Orchid & the Wasp is an up-to-the-minute, radiant début from a deeply talented writer.’ Nuala O’Connor, author of Miss Emily

'Though the stories she tells work their way through elaborate worlds, it is her characters, detailed with sharp and subtle grace, which power the engine of Caoilinn Hughes's vivid prose.'  Amelia Gray, author of Isadora